We come from the standpoint that the most important things in sitcom are the characters. They're the things we look for first when reading a script. So we're really interested in different ways that writers use to create them. One way that's often recommended is to write a biography. Something like this:

Harriet is 33 and lives in a one-bedroom flat in Streatham. She's got 7 O levels and 2 A levels. Her subjects were: 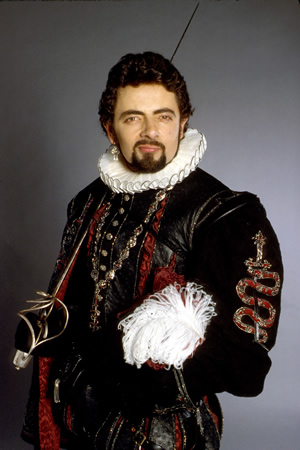 It feels like a worthy thing to do, but how useful is it when you actually sit down to write a scene to know that Harriet took Geography, but not History? Have you really learned anything about her? How much of a sitcom character's backstory do we need to know in advance anyway? Can anybody answer the following:

What did Basil Fawlty do before joining the hotel business?
Where did he meet Sybil?
Have they ever considered adoption?
Where was Edmund Blackadder (pictured) born?
What did his parents do?
Did he have a servant before Baldrick?

a) immediately ring the AA/RAC/Green Flag
b) burst into tears sobbing, "why does this always happen to me?"
c) ring a friend who knows about cars and beg them to come and help
d) open the bonnet and start tinkering.

Basil Fawlty wouldn't do any of these things; he'd punish the car by beating it with a large branch.

What would your character do in the following situations?

- While watching a film in the cinema the person behind them starts talking on a mobile phone.

- Standing in a crowded commuter train they see a seat that would be empty if the person opposite didn't have his feet on it.

- They hail a taxi only to lose it to a physically intimidating man.

- They put £1 in a vending machine, but nothing comes out.

- Your character finds their partner's diary.

- Your character is on a first date in a restaurant. The food is terrible. Do they complain?
- On a business trip/holiday they are offered guilt-free sex with no possibility of their partner ever finding out.

- Your character meets a breathtakingly attractive person of the opposite sex. They're getting on amazingly well when the gorgeous one mentions their love of astrology - "come back to my place, and I'll do your birth chart." Does your character: Pretend to be believe in astrology to end a sexual drought? Attempt to keep a diplomatic silence for the same reason? Argue that astrology's bollocks, and risk seeing the dry spell continue? For 'astrology' you can substitute foxhunting / vivisection / differing views on social issues, politics etc.

In any situation, non-action is NOT an option. One of the things that separates the long listed entries from the rest of the pack is that they have characters who TAKE ACTION. Either that, or their inability to voluntarily take action makes things even worse for them so that they are forced to take action.

This list is obviously not exhaustive. It isn't meant to be. We want to leave room for your input. What situations do you think would reveal most about your character?