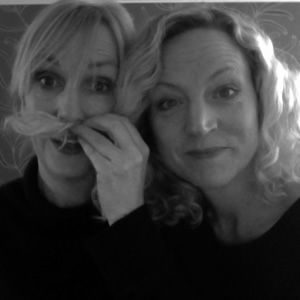 This week, we thought we'd hand it over to Abigail Dooley and Emma Edwards (pictured), winners of The Sitcom Mission 2011, to tell us about their experience last year creating 'What Next?'...

It's early 2010 and we are in the middle of a script meeting. There are 7 of us in the room and things are getting heated. "You are soooo annoying, I hate you, you're a complete idiot. GO AWAY!" someone screams. A fight breaks out, there's blood and tears. We calm everyone down and put the kettle on. Lesson One: Writing and child care don't mix.

A year-and-a-half later we are sitting in Hat Trick's offices talking about our sitcom. Everyone is over 14, we are wearing heels, make-up and laughing about a joke involving art critic John Berger! How the hell did that happen? Well....

Lesson Two: Get a writing partner

As we have both always worked collaboratively it seemed very natural to write together. There are a lot of benefits of writing with someone:

1. You can blame them for all the bits that don't work.

3. There's someone else to make tea.

Abigail trained at East 15 Acting School and spent several years trying to be the next Dame Judy. Meanwhile, Emma studied Creative Arts in Manchester and then went to Spain and sang in a Country and Western band. After embarrassing family and friends we trained (at different times) at Ecole Philippe Gaulier (alumni include Sacha Baron Cohen, Roberto Begnini and Simon McBurney).

We went on to devise, perform and direct with companies including Companie Philippe Gaulier, Trestle and Told By An Idiot. We finally met when Abigail directed a play for Emma's award-winning children's theatre company.

We were both interested in scriptwriting so, over the next couple of years, studied with Steve Kaplan, Robert McKee, Graham Alborough and Noel Grieg. Armed with all their brilliant tuition, we started writing together, mainly sketches and sitcoms ideas... 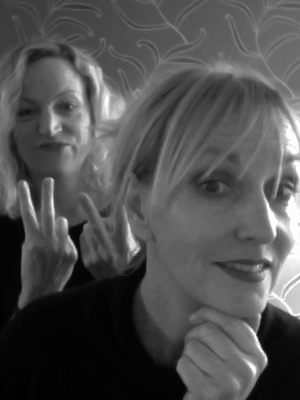 Lesson Three: Give yourself a deadline

We entered The Sitcom Mission 2010, but didn't make the first cut. However, we had very helpful feedback from Declan and Simon and on the strength of that decided to sign up to their Introduction to Sitcom Writing workshop. This is a great one-day workshop, small group, lots of practical exercises and advice. Back at the rock face, we had another stab at writing a sitcom, applying the techniques and tips we gleaned in the workshop and with The Sitcom Mission 2011 deadline in our sights.

Lesson Four: Write about what you know

With a new sitcom in hand, we took part in Declan and Simon's Help! I've Written a Script workshop. This brilliant workshop allows you to see your sitcom performed by a group of experienced actors. It is possibly the most terrifying and exposing thing we have done (we're even including childbirth here), but we learnt so much that day and can't recommend the experience enough.

Declan and Simon run these workshops a month or so before the competition deadline, giving you a really clear idea of where you need to re-write before submitting to the competition. They ruthlessly mark where the laughs come (or not) and hearing the script read aloud by a professional cast threw up loads of ideas. After a considerable amount of tweaking we entered The Sitcom Mission 2011.

We then heard that Hat Trick had got involved, that there was a £5000 prize and that they had received over 1,200 entries. We started writing a children's book. On 14 March we went to bed early. No point in staying up for the long list announcement at midnight. We might as well face the bitter disappointment in the morning. Shock horror and loud screams accompanied the discovery in the morning that we had made the 32! We happily burnt the children's book. We now had a month to deliver two more 15-minute episodes.

The first couple of days of writing were a nightmare. Episode 2 - "Something awful but funny happens to one of them". We were desperate.

Then something clicked and suddenly it all started to fall into place. We're not saying it was a breeze but looking back, it was a positive writing experience. We developed as writers over this intense period and became very disciplined, juggling kids and other work.

Through writing two more episodes, we started to define the sitcom and our style. The way we write is to spend time developing a main plot idea and then work on a Plot B that can weave through Plot A. We then divide the plots into scenes and improvise each scene, which we record. This is because we are frustrated actors, and any opportunity... We then script the scenes from the recordings. Finally we hone, trim, and edit until we stop laughing and start crying. Then our work is done.

We sent in the two extra episodes and waited. And waited. The night the final 8 were announced, Emma was on a plane to Spain. She heard the good news that we were through to the live shows from the hard shoulder of a dual carriageway in Malaga.

In preparation for the live shows, we had the opportunity to work with professional script editor Adam Bromley on the showcase script. This period was probably the hardest, steepest part of the learning curve. We really worked to get to grips with what the essence of the show was, and make sure the showcase drove that home. There was a very grim moment when we felt we had completely lost sight of what we were writing. Actually Abigail had lost sight of everything as her eyelids swelled up and Emma broke out in a rash on her hands and could no longer write. What catapulted us out of this dark night of the soul was the decision to make it a sitcom about three sisters, not just a group of friends. Suddenly everything fell into place. We learnt to be open to new ideas, kill your babies (or if not brave enough, at least put them into care), that comedy is subjective, and most of all to trust ourselves and our gut instincts.

Lesson Nine: Get the right director and cast

As we were writing the showcase episode, Declan and Simon were casting and looking for directors. They were very patient as our cast requirements changed daily. With 20 years' experience in theatre we were lucky to have worked with some great performers and directors so asked the extremely talented Cal McCrystal to direct and put together a fabulous cast.

Rehearsals began a week before the first show. Cal was happy to have us involved in rehearsals. It proved very useful, as during rehearsals new ideas, lines and character traits appeared which we could immediately put into the script. Also we had been along to all the other showcase performances which helped us to have a clear idea of what was working in the format. 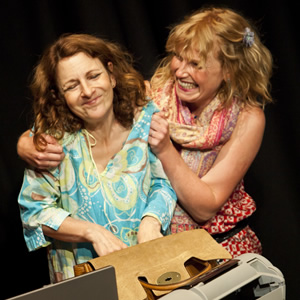 Lesson Ten: Get an audience

The first show went really well. We were terrified as we had rallied loads of family and mates to come. As one friend said "If this is bad, the school run's going to be awkward." Luckily they laughed. Like drains.

Again with the re-writes. We got some spot-on notes from Hat Trick, and sent out amended scripts to the cast. As we were re-writing, we realised we should have recorded the performance. Hearing where the laughs came and more importantly any deathly silences would have been very useful. Two weeks later we performed again, once more drumming as much support as we could muster.

It was fantastic to find out we were in the Grand Final. However, we were over-running and had to trim five minutes. Cut. Cut. Cut. We killed more babies than Herod.

The day of the Grand Final. The MOST IMPORTANT DAY OF OUR LIVES. Abigail's front tooth falls out. She looks simple and can't speak properly. Emergency dentist appointment is scheduled as Emma heads to London. Backstage the atmosphere is underlying panic, mixed with intense excitement, mixed with the props and costumes for five different shows, mixed with terror. Abigail returns with a full set of pearly whites. During the performance in front of the judging panel we watch between our fingers, scrutinising the judges' shoulders for signs of movement, and unable to swallow. At the 7.30 show we know it's all over and laugh hysterically at everything. 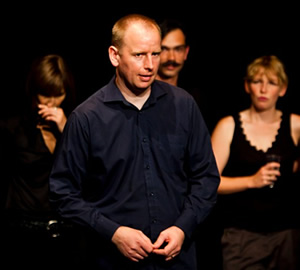 Everything goes into slow motion; we swear like troopers, hug everyone wildly and grin like lunatics. Then we pack up and go home.

What Next? indeed. Since then we've written a pilot, six episode outlines and a treatment which Hat Trick are about to pitch to broadcasters. Whatever happens, the last few months have been the most lesson-learning, stomach-churning, no-returning journey of a lifetime. Thank you hugely to Simon and Declan for their tireless commitment and support, to the fabulous women at Hat Trick for championing us, and to you dear reader for having read this far. Well done to all the 2011 finalists and the very best of luck to all of you brave souls entering The Sitcom Mission 2012.