Shappi Khorsandi has written her second novel, a modern tale of sexual abuse that reimagines the life of Emma Hamilton, Lord Nelson's mistress.

Kissing Emma is aimed at 12-15 year olds and will be published by Orion Children's Books on 2nd September.

It follows Khorsandi's 2017 Edinburgh Fringe show, Mistress and Misfit, in which she drew parallels between herself and Hamilton, who was effectively shunned and slut-shamed after Nelson was killed at the Battle of Trafalgar, as well as the comic's acclaimed 2016 debut novel, Nina Is Not OK, which explored issues of consent in its coming-of-age narrative of a teenage girl.

In Kissing Emma, the protagonist is described as "a beautiful, but vulnerable, young woman in a world obsessed with fame and fortune".

She and her mother are down on their luck, taking turns sleeping on the sofa in her nan's tiny flat and desperately trying to come up with an escape plan.

Emma is struggling with her family, struggling at school where the girls are bitchy towards her and the boys only seem to want one thing, and struggling with never having enough money for anything, ever.

However, just as she's contemplating quitting school to get a real job, she meets two men who convince her that she has a shot at modelling. Unfortunately, their motives are far from innocent, and she is soon pulled into a dark world. But then she meets Con, who is rich, handsome and romantic. Has her luck finally changed? 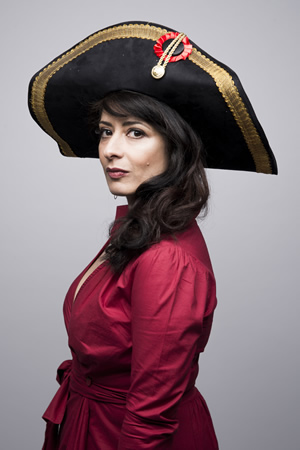 Responding to criticism about celebrity authors, Khorsandi tweeted yesterday: "'It's easier for you to get book deals because you're a comedian' is something a people have said to my face (god knows what they say to my feet) ahem, I've had juicy rejections. Spectacular ones. But I keep on with my ideas, keep moving. Kissing Emma is out in September", adding a kissing emoticon.

The comedian, who published the memoir A Beginner's Guide To Acting English in 2009, has spoken about sexual abuse she has experienced and the misogynistic banter that she has been subjected to in comedy. In her previous role as president of the British Humanist Association, she lobbied for better sex and relationships education in schools.

"The emotions around sex need to be talked about in a safe place and I can't think of a safer place than school," Khorsandi told the Guardian in 2016. "We need to let our guard down and be less prudish. You're not ruining a childhood by talking about sex and relationships."

She added: "There were incidences when I was younger, one in particular, where if I had known the law I would have gone to the police. And I'm so glad for this generation that historical rape cases are being brought forward, and people are being charged. And that women who make a complaint after being raped when drunk are taken seriously.

"I don't think it happens more often, I think that my generation just 'put it down to experience' ... you weren't walking down an alley, you weren't dragged down by a stranger and therefore you haven't been raped."

Writing in The Independent in 2019, she catalogued some of the violent sexual humour she'd endured in gig changing rooms and the circuit gossip she had fallen foul of, adding: "I doubt that the booker who often took his willy out to show me ever got a warning, nor the manager who told me to wear red lipstick on stage to look 'even more f***able'.

"Then there were the sleazy reviewers and producers who would take me out for dinner or drinks to 'discuss things' but, when I got there, made it perfectly clear that comedy was not top of the agenda.

"There still seems to be a residual attitude that female performers are fair game, and I'm frequently shocked at the lack of boundaries some people have when they approach me offstage, perhaps because we share so much of ourselves in our performance."

Last year Khorsandi appeared in a sitcom pilot being developed by Big Talk (Cold Feet, Spaced, Black Books), Nefertiti, loosely based on the life of drag queen Glamrou, in which she played the main character's conservative Arab mother. Her stand-up tour, Skittish Warrior, is currently continuing online but is set to resume in theatres in June.

Last week she was rushed to hospital with a suspected heart attack but it turned out to be a false alarm.

From widely acclaimed comedian and author Shappi Khorsandi comes a modern fable about the rise and fall of a beautiful, but vulnerable, young woman in a world obsessed with fame and fortune.

Emma and her mother are down on their luck. They're taking turns sleeping on the sofa in her nan's tiny flat - and desperately trying to come up with an escape plan.

Emma is struggling with her family, struggling at school where the girls are bitchy towards her and the boys only seem to want one thing, and struggling with never having enough money for anything, ever.

Just as she's contemplating quitting school to get a real job, she meets two men who convince her that she has a shot at modelling. But their motives are far from innocent, and Emma is soon pulled into a dark world. And then she meets Con, who is rich, handsome and so romantic! Has Emma's luck finally changed?

Kissing Emma is inspired by the real life and untold story of Emma Hamilton, Lord Nelson's mistress. But Shappi Khorsandi's modern Emma is going to get the happy ending her namesake never did - and stick two fingers up at the men who dare to take advantage of young women while she's doing it.