John-Luke Roberts plans to release his new comedy album It Is Better on vinyl.

Made during lockdown, it was recorded without an audience, but instead features a especially composed soundtrack.

The comedian has teamed up with Monkey Barrel Records, the label run by the Edinburgh comedy club Monkey Barrel. It will be the fourth release from the label, having previously issued recordings of John Kearns, Olga Koch and Ari Eldjárn's 2019 Fringe shows.

It will be their first release to be conceived, written, recorded and scored specifically for vinyl. 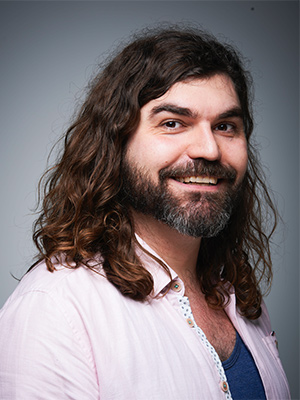 It Is Better is the ninth comedy hour by Roberts. A co-founder of the Alternative Comedy Memorial Society club nights, his other notable shows include [l]Stdad-Up[/i], Look on My Works, Ye Mighty, and Despair! (All in Caps) and the particularly long-winded [l]John-Luke Roberts: All I Wanna Do Is [FX: GUNSHOTS] With a [FX: GUN RELOADING] and a [FX: CASH REGISTER] and Perform Some Comedy![/l].

Roberts had been planning to record a regular live show until the coronavirus pandemic halted audience events.

He explains: "I realised my favourite comedy records didn't have an audience. So I sat down thinking of albums like Sir Henry At Rawlinson End and Ivor Cutler's Dandruff and grew more and more excited at the prospect. Without an audience, a comedy record can achieve a startling intimacy."

Roberts made It Is Better "specifically to be listened to - ideally in the evening, in a comfortable chair, by a warm fire, with a nice drink, while long-thought extinct beasts rampage through the streets outside".

The recording was scored by composer John Chambers, who has previously worked in the theatre with the likes Steven Berkoff and John Cleese.

Its artwork is by photographer Natasha Pszenicki, featuring a doll's house-scale comedy club built by Roberts during lockdown. He quips: "they closed the comedy clubs and the theatres, so I built one as a not-entirely-successful coping mechanism".

Monkey Barrel Records has set up a Crowdfunder page to raise the £2,500 needed to produce the records.

Below is a video recorded by Roberts in which he explain more, and gives a tour of his miniature comedy club:

John-Luke Roberts - It Is Better

It Is Better is the fourth release from Monkey Barrel Records, and the first to be conceived, written, recorded and scored specifically for vinyl.

A brand new show by John-Luke Roberts with music by John Chambers, it has been created specifically to be listened to - ideally in the evening, in a comfortable chair, by a warm fire, with a nice drink, while long-thought extinct beasts rampage through the streets outside.