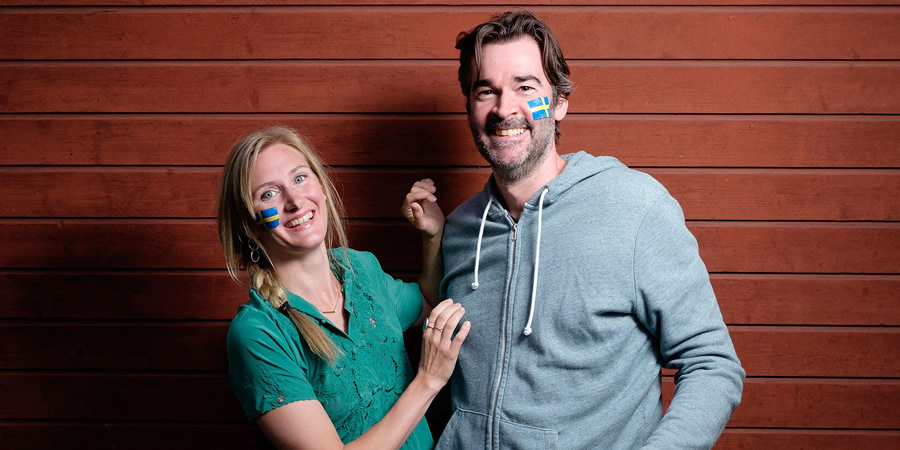 Radio 4 sitcom about a stand-up comedian from London who is living in Sweden. Written by Danny Robins and starring Adam Riches

This series, set and recorded in Sweden, stars Adam Riches and some of Sweden's most popular TV comedy actors.

In Series 1, Geoff moves to the tiny, cold and unpronounceable village of Yxsjö in northern Sweden; a culture shock forced on him by his Swedish girlfriend Linda's decision to move home to raise their child.

Geoff has to contend with snow, moose, pickled herring, unemployment, snow, Maypole dancing, snowmobiles, snow, meatball rolling, saunas, social democracy, snow, the weirdest pizzas in Europe, bears, deep forests, death metal, illegal alcohol and... snow. Above all, he has a new family to contend with, the Andersson's bewilder him - from father Sten who has a worrying tendency to growl like a bear and threaten him with any blunt instrument to hand to Gunilla who threatens him with naked folk-dancing.

It's worth it all for Linda, of course, apart from her new found urge to conform with everything, except for her brother, a Goth with a propensity to set fire to things.

In Series 2, new dad Geoff has plenty of fresh experiences to contend with, including three varieties of pickled cabbage, sinister Christmas elves and an unpleasant visit from Sweden's answer to the BNP.

While Geoff and Linda now have their own place, he still has to deal with her disapproving Dad, Sten, her alarmingly flirtatious mother Gunilla and her apparently suicidal, arsonist brother, Anders.

Geoff is determined to be more Swedish than the Swedes as he takes to his new country with renewed enthusiasm, and he has help, in the form of fellow ex-pat, cynical Ian, an unending source of (slightly misleading) information, and Soran, a Danish Kurd with Swedophobia.

Series 4 features Pippi Longstocking, the notorious NWA (Norwegian Woodwind Assembly), Anders getting a girlfriend and Geoff becomes the face of Yxsjö's tourist board...