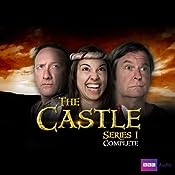 Thrill! as brave knight Sir William De Warrenne comes back from the Crusades and tries to buy a castle with a combined dungeon/gym.

Sympathize! as lord of the castle Sir John hires the latest top-of-the-range horse, but can't work out what to do with the built-in ashtrays.

And Get Out Your Dictionary! as the medieval equivalent of Gordon Ramsey tries to prepare a banquet with a mandolin and some very old swear words....