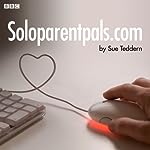 After much turbulence Rosie and Tom are now living together in Bolton. Rosie is happy in her job but Tom finds being a house-husband a challenge.

But when Rosie is unexpectedly made redundant, Tom is forced to look far afield to bring home the bacon, and finds himself working four...

The complete second series of the BBC Radio 4 full-cast drama about two single parents who met on an internet chat site and developed a friendship.

Series 2 of Sue Teddern's story of the long-distance friendship between two parents stars Maxine Peake as Rosie and Kris Marshall as Tom. Also...

A BBC Radio 4 full-cast drama about two single parents who meet on an internet chat site and strike up a friendship.

This first series was originally broadcast as Singleparentpals.com.