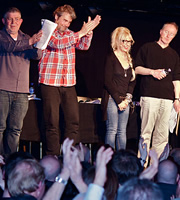 The much-loved sketch group - consisting of Pete Baikie, Morwenna Banks, Moray Hunter, Gordon Kennedy and John Sparkes - recorded almost 45 minutes of material, so the full half-hour show will allow radio listeners a chance to hear even more new sketches from other Absolutely characters, such as Frank Hovis and The Old Lady Artist and even more from Stoneybridge and Calum Gilhooley.

An extended clip of the Absolutely special of Sketchorama. Now featuring "On The Lavatory With Frank Hovis" and The Old Lady Artist