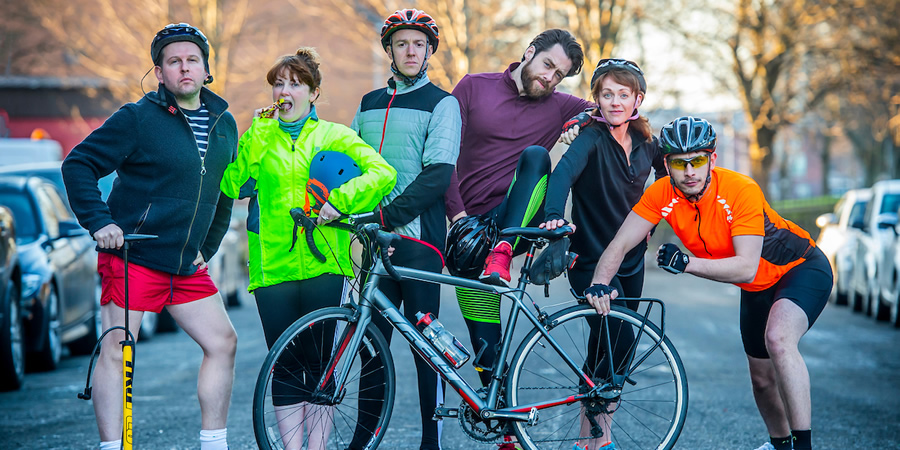 Comedy about the members of the Easy Riders Cycling Club

Saddled meets the members of the Easy Riders Cycling Club.

According to their newest member, Mark Nichols, the club is full of weird, dreadful, insecure people who should take the money they waste on buying lycra cycling gear and spend it on therapy. And he should know, his wife, Dawn is a member.

Mark is a man whose hatred of sport and exercise is rivalled only by his distrust of those who participate in it. Mark's wife, Dawn, used to feel that way too, but in the last year she took up cycling and got hooked.

Fearing being left behind on the sofa watching box-sets, Mark decides to buy a bike and join her group hoping that having a shared activity will bring them and their marriage closer together.

Once he's ingratiated himself with the group he realises that, like any club, there is a clear pecking order, and whilst Dawn is often out in front with the fitter cyclists like Handsome Jack and group leader Francis, Mark is at the back, bringing up the rear with the slower riders Sue and Brennan. Mark discovers that not only was he pretty much right about this group of cyclists being insecure and easily angered, but that he's fast becoming the worst of them all.

In the second series, the members of The Easy Riders cycling club gear up for more tales from the cycle lane. Jack has left the group to attend a Buddhist retreat (to deal with his 'Dawn issues'), Brennan has opened his "bike shop SLASH café", Sue is still bringing her own food and avoiding paying club subs, Francis still lacks the basic human qualities to be group leader, and new boy Robbie bring his extraordinarily bad people skills to the group dynamic.

The Easy Riders interactions are still underpinned by the rocky marriage of Mark & Dawn. Both are making a more concerted effort to be open with, and supportive of, each other. But old issues still rear their heads as they continue to see the world in different ways, and the group learns that Mark and Dawn are able to cause even more chaos together than they ever did apart.