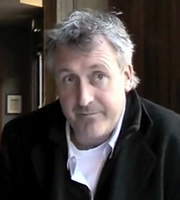 Described as "the Don of Irish comedy" by the Irish Times, Barry Murphy has watched as his protégés Eddie Izzard, Tommy Tiernan and Dylan Moran go on to international fame.

Murphy is arguably the most respected topical comic/satirist in Ireland and he gives Rory a unique insight into the rich world of Irish satire.