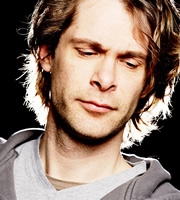 Hans Teeuwen, from Amsterdam, is an absurdist comic performer and singer who takes great risks on stage and has been likened to Bill Hicks and Andy Kaufman. But after the murder of his close friend Theo Van Gogh, he decided to start performing his Dutch "cabaretier" show in English to wide acclaim.