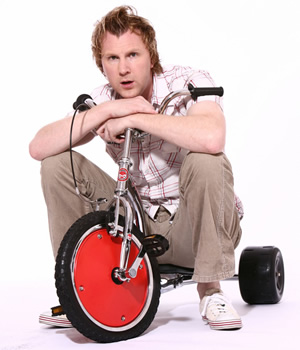 Irish stand-up comic Jason Byrne could be set for mainstream stardom after landing a BBC One sitcom pilot.

Father Figure - created, written by and starring the stand-up comedian - centres around the life of Tom, a married man with two sons who tries to be the best Dad he can, but bad luck and his extended family are always upsetting plans.

The sitcom is already a series on Radio 2 and Byrne will be joined on screen by the cast of the radio show - Pauline McLynn, Michael Smiley and Dermot Crowley.

The last sitcom to transfer from Radio 2 was Miranda Hart's Joke Shop, which became smash hit BBC Two sitcom Miranda (which is due to transfer to BBC One for its third series at the end of the year). Father Figure looks set to start directly on BBC One. Channel controller Danny Cohen has previously announced he is looking for more live audience sitcoms based around families, with Citizen Khan another of the shows in development.

BBC commissioner Cheryl Taylor says: "Jason Byrne is a bright and bouncy performer and already much loved by Comedy enthusiasts everywhere. Following a successful run on BBC Radio 2 we're really looking forward to developing the new pilot of Father Figure for BBC One."

BBC comedy boss Mark Freeland adds: "I have followed Jason Byrne for years and he has made me laugh my hair off many, many times. I am thrilled that we are capturing his stand-up verve in a wonderful new sitcom pilot."

Jason Byrne himself comments: "I am delighted to finally announce that we will be making a pilot of my sitcom Father Figure. It's been a big dream of mine and I'd never have thought I would get the chance to join the ranks of the television sitcom world. The characters all come from real life and the outrageous situations Tom gets into have, more often than not, actually happened to me. The people in my life will never realise that it's them I'm writing about, unless my wife and two sons, mother, father and best mate ever watch it. So thank you very much BBC and let's hope that by this time next year, the words 'Father Figure' rolls off the tongues of thousands."

The pilot of Father Figure will go into production next year with Julia McKenzie, who looked after the radio show, acting as Producer. Stephen McCrum, whose CV includes Two Pints Of Lager and Mrs Brown's Boys, is the Executive Producer on the project.

Below is a video clip from the recording of the radio show - a scene set in a car - in which Dermot Crowley, who plays Pat, struggles to say his line without laughing: