Chris Neill is to make a new comedy for Radio 4.

The broadcaster has commissioned six episodes of Raging Enigma from the comic and former Just A Minute producer, following three series of autobiographical Woof.

Continuing in the autobiographical vein, the new series is described as a follow-up, mixing stand-up and sketches to tell more stories from his life.

Themes covered to date have included his break up and subsequent search for - and finding - a new boyfriend; ageing; love; observations on life; and getting a dog.

The new programme will be made by Steve Doherty at Giddy Goat Productions and is expected to air late in 2021 or early 2022.

Chris said today: "Obviously we're delighted. After three series of Woof it's very exciting to be developing something different. If you've heard our shows already I sincerely hope you liked them. And, I guess, the same goes if you do listen to them in the future. Obviously, if you don't listen I just hope you can live with yourself." 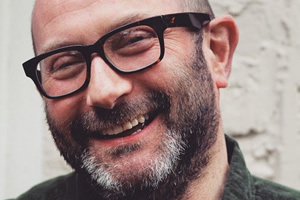