Radio 4 is to broadcast a series of comedy programmes under the title Summer Comedy Festival.

The station explains: "Expect a summer festival with a difference as some of the nation's favourite comics turn curators and host a virtual festival featuring their favourite performers from the worlds of comedy, literature and spoken word."

The series will start this coming Friday (24th July) in the station's 6:30pm comedy slot, with a show from former News Quiz host Miles Jupp (pictured).

"Stand-up and writer Daliso Chaponda takes the reigns for Friday 7 August with a line-up soon to be announced around the theme of protest; Funny Women Award-winner Jayde Adams, presents a glittering line-up on 14 August topped by cabaret star Le Gateau Chocolat. Comedian, actor and author Sara Pascoe's Tear-Jerker festival is scheduled for 21 August, and Edinburgh Comedy Award-nominee Darren Harriott's Carnival Of The Unexpected [is] on 28 August."

Commissioner Sioned Wiliam says: "Our six hosts each have their own brilliant styles but they share comedic excellence which I know listeners will hear in their curations too. Radio 4's Summer Comedy Festival hopes to give listeners a little bit of the magic they may be missing whilst most live events aren't taking place." 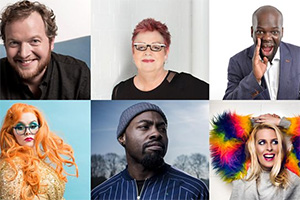