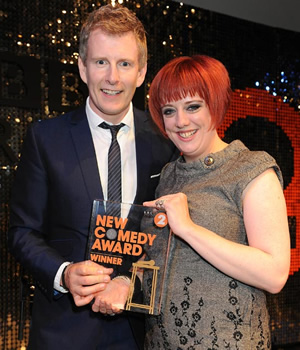 Angela Barnes from Brighton has been crowned the winner of the BBC New Comedy Award 2011.

Hosted by Patrick Kielty, the final was broadcast live on Radio 2 from The Tabernacle in Notting Hill on Saturday night, with six stand-up comedians battling it out in the public vote.

The finalists - Pat Cahill, Chris Turner, Tez Ilyas, Angela Barnes, Joe Lycett and Mark Restuccia - were critiqued by a panel of professionals, including Sarah Millican, Stephen K Amos, Radio 2 comedy controller Jane Berthoud and Radio 2 boss Lewis Carnie, but ultimately it was the public who voted to decide the winner.

Barnes, who is from Maidstone but now lives in Brighton and progressed through the city's heat via the online public vote, receives a big boost to her profile as a result of this win. She also now has the opportunity to perform a slot in Radio 2's Comedy Zone and will be interviewed by Steve Wright during the Comedy Hour on Radio 2's upcoming 2DAY programming this Wednesday 22nd June (the day on which the station's schedule is flipped to allow listeners to hear programming they might otherwise miss). Barnes will also receive development advice and guidance from the BBC and is in talks about the possibility of appearing on other slots on BBC Radio.

Following the news of the win, she said: "This is a massive privilege and the fact it was a public vote makes it all the more special. It's been an amazing journey with brilliant people and I hope this will open some doors and I look forward to gigging with my fellow finalists on the comedy circuit."

Host Patrick Kielty added: "Angela tonight came out and impressed again. It's one thing to win a heat but to come out here with fresh material and the confidence that she had tonight set her apart, and the great British public agreed. But I have to say all of our six finalists will have a big future in comedy."

The BBC New Comedy Award originally ran from 1995 to 2001, and previous finalists have gone on to become some of the biggest and most successful names in comedy today. Previous participants include Marcus Brigstocke, Alan Carr, Rhod Gilbert, Russell Howard, Peter Kay, Justin Lee Collins and Josie Long.

You can hear the winning set from Angela Barnes below...