The BBC has defended Jo Brand against claims she incited violence by talking about throwing battery acid at "unpleasant characters".

Brand was appearing on Radio 4 panel show Heresy, which challenges comedians to take on received opinions.

When asked by presenter Victoria Coren Mitchell if she thought that the country is living through a "terrible time, from a parliamentary point of view", she responded: "Well, yes, I would say that, but I think that's because certain unpleasant characters are being thrown to the fore, and they're very very easy to hate. And I'm kind of thinking 'why bother with a milkshake, when you could get some battery acid?'"

She then followed-up with: "I'm not going to do it, it's purely a fantasy, but I think milkshakes are pathetic, I honestly do. Sorry.", however these words were cut out of widely-shared audio clips posted on social media.

Her comments in the show - Series 11, Episode 1, broadcast on Tuesday at 6:30pm - has lead to complaints.

Nigel Farage, who was doused in milkshake whilst on the campaign trail - added to his social media account, "This is incitement of violence and the police need to act."

The BBC says the jokes made on Heresy are "deliberately provocative, as the title implies", adding the panellists' statements were "not intended to be taken seriously."

At the end of the episode, Coren Mitchell commented: "I think it might be a slightly risky time to make this series, which was originally set up to test the boundaries of what it is OK to say and not say. Good luck us in 2019. We'll be back next week... or will we?"

Later, responding to Farage on Twitter, she said: "Nigel! I'm genuinely disappointed; we don't agree on everything, but I would totally have had you down as a free speech man. Especially when it comes to jokes."

She also encouraged her followers to listen to the full episode, for the full context:

The BBC edited out the joke from the episode on BBC Sounds.

The corporation said: "We carefully considered the programme before broadcast. It was never intended to encourage or condone violence, and it does not do so, but we have noted the strong reaction to it. Comedy will always push boundaries and will continue to do so, but on this occasion we have decided to edit the programme. We regret any offence we have caused."

David Baddiel told BBC's Newsnight he did not think the BBC should have done that, saying "I don't think I would have nipped it out. Morally wrong? I'm not sure. I think they're just trying not to cause trouble. If it was up to me, I would have kept that line in for the repeat. Apart from anything, it's a bit silly when it's had massive coverage to cut it out - that looks a bit cowardly."

The Metropolitan Police looked into the incident but decided no further action would be taken. They said: "Police received an allegation of incitement to violence on 13 June, relating to comments made on a radio programme. The referral has been considered by the MPS and no further police action will be taken in relation to this allegation."

Brand, appearing at Henley Literary Festival, apologised, saying "Looking back on it I think it was a somewhat crass and an ill-judged joke. Nigel Farage tweeted the first bit that I said without the second bit when I apologised and said it was a joke and not something I would encourage. The current situation is I'm being chased around England and being asked if I feel I should apologise. I felt I apologised for it as I did it on the night. I'm a human being and people make mistakes. I apologise to all the people who I have offended."

The Sun added that she said: "I don't think it's a mistake. If you think it is I'm happy to accept that. Female politicians and public figures are threatened day in, day out, with far worse things than battery acid... rape, murder and what have you. At least I'm here and trying to explain what I did. I don't think I have anyone to answer to. Nigel Farage wasn't even mentioned by me on the night so why he has taken it upon himself I don't know." 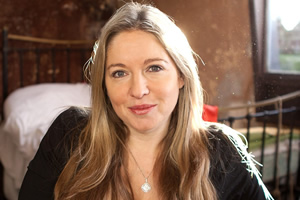