Sara Pascoe and Aisling Bea are to co-host a new Radio 2 chat show.

An initial episode of What's Normal? is due to be recorded in London on Monday evening.

Previously announced as Am I Weird?, the "comedy chat show" aims to explore our individual quirks and eccentricities in order which are perfectly normal, and which are "just plain weird".

The pair will be joined by three celebrity guests to chat about their habits, with Sara, Aisling and the audience acting as "judge and jury to whether these quirks are normal or not".

Due for broadcast as part of Radio 2's 2018 Comedy Showcase, the programme is being made by Phil McIntyre Entertainments and will be aired at the end of April or early May.

The pilot will be recorded on Monday evening at the Backyard Comedy Club in east London. Anyone interested in attending is asked to email rsvp@mcintyre-ents.com.

Pascoe posted the following advert for audience members on Instagram this evening. 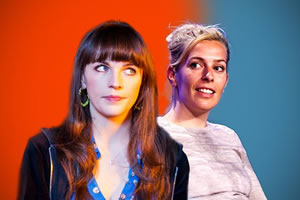