Ruth Jones, writer and star of Welsh valleys comedy drama Stella is to bring her own sitcom to BBC Radio Wales.

The comic actor and writer, who also co-wrote and starred in TV sitcom Gavin & Stacey, will again both write and star in Splott, to be broadcast from February 2018.

A six-part series set in the Cardiff district of the same name, Splott will follow single mother and school cook Mandy.

The BBC says: "When life gets tough Mandy turns to her bonkers neighbour Val, and her sweet but serial-killer obsessed colleague Kathleen. A passionate, sometimes gung-ho, but big hearted Mandy simply seeks peace, romance and happiness... none of this comes her way without a fight."

Ruth Jones says: "Let's be honest, who can't help but love the name Splott. A name made more loveable by the fact that it's a real place nestled in the heart of Wales's capital. I'm so excited to be playing a strong gutsy Cardiffian in what I hope is going to be a refreshingly daft and silly sitcom on Radio Wales."

Colin Paterson, Editor of Radio Wales, says: "Ruth is one of the biggest comedy talents of her generation; I couldn't be more pleased that she has agreed to work with Radio Wales."

Sky 1 comedy drama Stella is currently off air but expected to return by 2020. 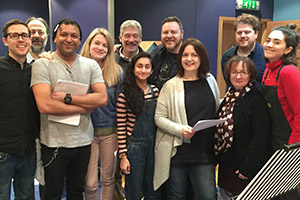