Fags, Mags And Bags, Radio 4's sitcom set in a Scottish corner shop, is to return for a seventh series.

The commission of four new episodes follows the programme's success in 2016, when it returned to the airwaves after a break of four years.

The Scottish-Asian comedy, written by and starring Sanjeev Kohli and Donald Mcleary and produced by Glasgow-based production company The Comedy Unit, has been a favourite with audiences and critics alike since it first aired on Radio 4 in 2007. The show has picked up three Writers' Guild Award nominations for Best Radio Comedy, winning in 2008; with Series 6 also picking up a Celtic Media Award nomination for Best Radio Comedy.

Producer Gus Beattie also won an Audio Production Award for Best Comedy Producer in 2016 for his work on the show.

The new series starts recording in late June, with guest stars such as Greg McHugh, Mina Anwar, Simon Greenall and Sean Biggerstaff already confirmed to appear in the new series.

Sanjeev Kohli says: "In a world where the global political landscape shifts on a daily basis, it's important to know that (a) there will always be a place where you can buy a graduation card with an embossed picture of a boy heading a football & (b) Curly Wurlies have maintained integrity of length."

Donald Mcleary adds: "I love the smell of Toilet Duck in the morning. Smells like... Toilet Duck."

The new four-part series will air from Monday 28th August in Radio 4's 11:30am comedy slot. 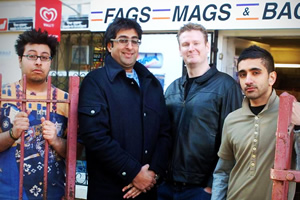