David Mitchell and John Finnemore are to star in a sitcom about time travel for Radio 4.

Time Spanner is described as "a comedy about time travel, an evil self-storage empire, a slightly defensive angel and something rather a lot like love at first sight".

Mitchell, who is currently starring in Upstart Crow will take on a lead role, alongside Cabin Pressure star Finnemore. Also appearing in the show will be actors London Hughes, Jeremy Limb and Simon Kane.

Time Spanner has been created by Kane. The actor and writer currently stars alongside Finnemore in the hit sketch show John Finnemore's Souvenir Programme and has previously written for shows such as That Mitchell And Webb Look.

The pilot episode is being overseen by Gareth Edwards, the producer who has worked on many comedies, including various Mitchell & Webb programmes.

Writing on Twitter, Finnemore said of the Time Spanner script: "It's incredibly funny and strange and moving but especially funny." He also revealed: "Simon has cast me as a dead dog."

The pilot episode will be recorded in front of a live audience at the BBC Radio Theatre in London on Wednesday 8th June. Tickets 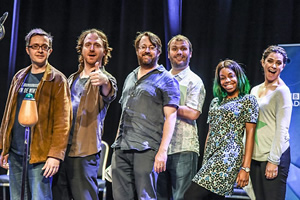