Entry is now open for the BBC Radio New Comedy Award 2016, one of the country's major stand-up competitions.

The corporation says: "The BBC Radio New Comedy Award returns for 2016, searching the UK to find the comedy stars of the future. Think you have what the world of comedy needs? We want to hear what you've got!"

This year, the final will be broadcast live on Radio 4 as part of its Edinburgh Fringe programming, rather than being incorporated into Steve Wright's show on Radio 2 as has been the process for the last few years. 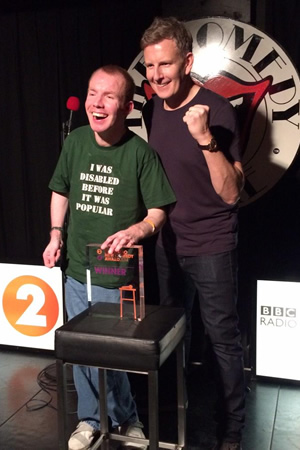 Radio 4's Sioned Wiliam says: "I am delighted to open the BBC Radio New Comedy Awards for entries for 2016; it feels right that the competition will now be hosted by Radio 4 which is after all the home of radio comedy. We have a long tradition of supporting new comedy talent and it's very exciting to be searching for a brand new comedy star!"

This year's prize is £1,000, plus a 15-minute script commission from BBC Radio Comedy. Additionally, all finalists will be mentored by the corporation's in-house comedy department across the year. Although not mentioned by the BBC, the exposure of being in the broadcast final is probably the biggest bonus. Recent winners have all gone on to further success.

The BBC points out: "2012's Lucy Beaumont has a second series of To Hull And Back starting on Radio 4 later this year; and 2013's Steve Bugeja has supported Russell Kane on his tour and contributed material to a number of BBC TV and Radio comedy shows. In 2014 the title was taken by Lost Voice Guy (pictured) who is currently writing a radio pilot for in house development, and in 2015 it was won by Yuriko Kotani, who is now working closely with the BBC Radio Comedy department."

Entrants need to submit a 5 minute audio recording of a comedy routine (sketch, music or stand-up) via bbc.co.uk/newcomedyaward before the closing date of Tuesday 19th April 2016.

Before entering, do view the Terms & Conditions. The rules state you must be 18 or over to enter, and you must not have been performing regularly on the circuit for more than the last five years.

The first round of heats take place as follows:

The best 60 entries will be selected from the six regional heats, with footage from those heats broadcast on Radio 4 Extra. The semi-finals and finals will be recorded at the Edinburgh Fringe Festival with the final being broadcast live on BBC Radio 4 on Sunday 14th August 2016.