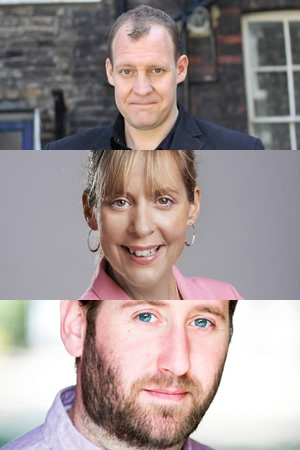 EDIT, 4th September: Jim Howick has had to drop out of the project. David Mounfield has now been cast in his place.

Justin Edwards, Mel Giedroyc and Jim Howick are teaming up to star in a new Radio 4 comedy.

The BBC, talking about the format, explain: "Justin Edwards tries his best to control Mel Giedroyc and Jim Howick as they team up for a gleeful half hour of sketches and musical comedy.

"They will also be joined by a mystery special guest, who will take centre stage in a thrilling radio drama, if Justin gets it written in time, and if Mel remembers the lines, and if Jim remembers to turn up..."

A pilot episode of the format is due to be recorded at The RADA Studios in London on Monday 21st September. To apply to be in the audience see our free tickets page

All three of the stars are already well known to comedy fans. Justin Edwards recently hosted Chat Show Roulette, and starred alongside Miles Jupp in the sitcom In And Out Of The Kitchen.

Meanwhile Jim Howick, who established his comedy acting credential via shows like Peep Show, will next be seen in the feature film Bill and new BBC comedy thriller Stag.

All three have starred in CBBC sketch shows too. Edwards and Giedroyc were regulars in Sorry, I've Got No Head whilst Howick formed part of the Horrible Histories ensemble.

It is not yet clear whether or when Bun Club will be broadcast on Radio 4. Further details are expected in due course.