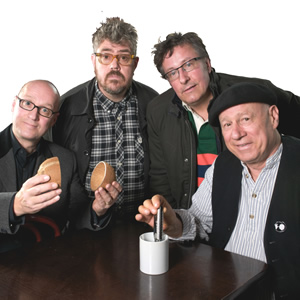 The four comics, who perform live together as The Idiot Bastard Band, will record the sitcom, In Transit, next month, loosely based on their real-life band and themselves.

The sitcom will portray the outfit as a struggling musical group, however in reality The Idiot Bastard Band has enjoyed a string of sell-out gigs.

The description for In Transit explains: "This band is a band in trouble. It has a name that cannot be said on radio and is on its uppers. The band struggles from small, under-attended gig to small, frequently cancelled gig."

In the pilot the band are constantly on the road, and the comedy will be given a surreal twist. Radio 4 says the bus in the show "is more like a TARDIS - a surreal bus with bedrooms upstairs, a lab at the back and, naturally, a wine cellar. The band lives in the bus all the time."

The comedy is being overseen by Giddy Goat Productions. Show producer Steve Doherty tells BCG: "I'm really excited about this project. I've worked with Phill before on radio & TV programmes, but it's my first time working with Ade, Neil & Rowland. Between us we have nearly 700 years experience in entertainment. It should be a great night and a very funny show for Radio 4."

Adrian Edmondson, who also fronts the band The Bad Shepherds, recently said, according to a newspaper article, that he is not interested in most modern comedy. He commented: "Now comedians start as the establishment. I think you can even take a degree in comedy somewhere. It's great that so many people want to do it but I don't find much of it very interesting."

The pilot episode of In Transit will be recorded at RADA Studios in London on the 17th October. To apply to be in the audience see our free tickets page 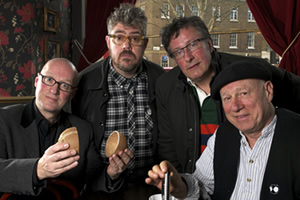