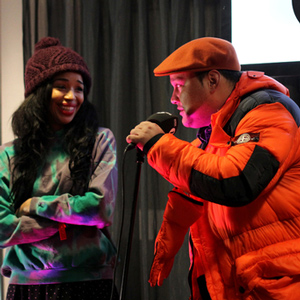 Urban music station BBC Radio 1Xtra has announced its first ever comedy season, to run from the 8th to 28th of April.

The comedy drama, Knockback has been written by and will star Daniel Kaluuya (Psychoville, Johnny English Reborn, Harry & Paul and Jason Lewis (Coming Of Age, Horrible Histories, Watson & Oliver). Released as six 10-minute episodes on the Radio 1Xtra website, an hour-long omnibus edition will be broadcast on Sunday 14th April at 9pm.

Knockback will tell the story of "two young guys trying to make it in life, and their pathetic and loveable failures along the way", and will also feature actresses Larissa Wilson and Seroca Davis, plus a guest appearance from rapper Wretch 32 and cameos from Radio 1Xtra DJs Twin B and Sarah-Jane Crawford.

Meanwhile, Radio 1Xtra's Comedy Club will run for four nights from the 8th to 11th April. Each hour long show is due to be packed with "laugh-out-loud comedy from some of the best young comedians of the moment".

Sloth will also present a series of sketches during his regular drive-time slot on Thursday 25th April, between 4 and 7pm, entitled Charlie Sloth's Rinse Out. Described as being a "sketch-based comedy show all about himself - the self-proclaimed 'best looking fat guy in the universe'," the programme will feature N-Dubz singer Tulisa Contostavlos performing twisted versions of her songs, a mockumentary all about a day in Charlie's life, a Toilet Humour strand with legendary DJ Trevor Nelson, as well as pranks and musical spoofs.

The show will be visualised on the Radio 1Xtra website and sketches will also be available on the 1Xtra YouTube channel, along with other content throughout the season.

Finally, the series of 'Comedy Takeovers' will run from the 15th to 21st of April, seeing "well-known character comedians set to take over the station's daytime schedule".

The comedians set to take over the daytime shows of Twin B, Trevor Nelson, Sarah-Jane Crawford and Charlie Sloth during the week include Bricka Bricka, Kayvan Novak (Facejacker), Jocelyn Jee Esien (aka Mrs Kingston), Fire In The Spoof, Mo The Comedian, Lee Nelson, A Squeezy and Klayze Takeover, A Dot Comedian, Farley and Reid, Terry Mynott (The Mimic), Kurupt FM (BBC Three), KG and Marston (featuring 'Caramel' live performance), Man Dem On The Wall, and Jazzie. The weekend schedule will also feature comedic appearances from charismatic rapper Lethal B and stand-up Paul Chowdhry.

Each act will hijack features, take over some of the music choices, interact with listeners, or deliver full-blown mock-pilots live on the air.