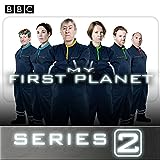 Nicholas Lyndhurst and Vicki Pepperdine lead the cast of the BBC Radio 4 sci-fi sitcom set on a shiny new planet, as it returns for a second series.

With the leader of the interplanetary colony expedition dead, his Number 2 - Brian - is now in charge. He's a nice enough chap, but his desire to sort things out with a nice friendly meeting infuriates the colony's Chief Physician Lillian, who'd rather everyone was walking round in tight colour-coded tunics saluting each other. She's also in charge of Project Adam, the plan to conceive and give birth to the first colony-born baby.
Adding to the joie de vivre are an entirely unscrupulous Chief Scientist and an idiot maintenance man, who believes he's an "empath" rather than a plumber.

In these six new episodes the contents of Lillian's freezer threatens to make the colony's men unnecessary for ever more; a dangerous snuffly cold is let loose; a pub quiz and a talking yam spell disaster; election time arrives; the discovery of a poet amongst the colonists sets off trouble; and a dangerous search-and-rescue mission is launched on the planet's surface.