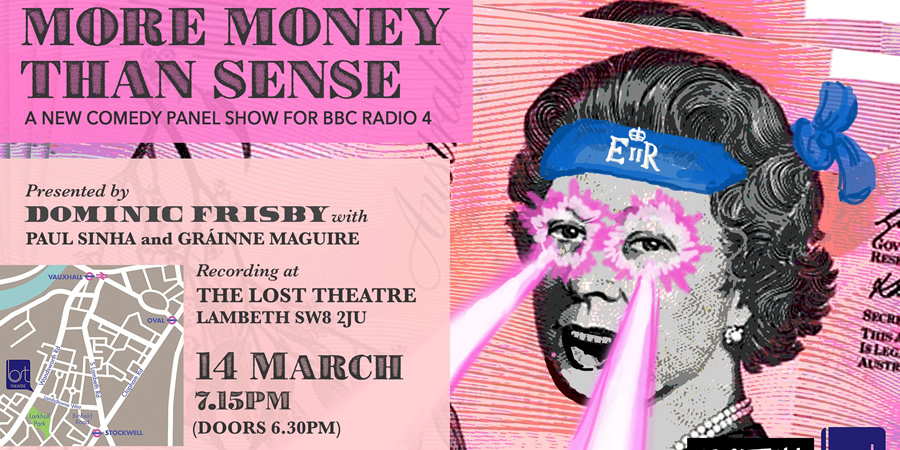 More Money Than Sense explores the outrageous world of pop economics by asking questions no other show with any sense would even touch.

How much is illegal sperm? Which PR firm should you hire for your murder trial? How are honey bees traded on the black market? These are just a few of the outlandish questions our panel of comedians and financial journalists will try and tackle. With the help of our impeccable host and resident economist, who'll provide the almost unbelievable answers to these ridiculous questions!

This is a unique satirical quiz show intended to make you gasp and walk away feeling a little savvy about the peculiar world of pop-economics! It's the QI of Pop Economics.

The show is hosted by comedian, writer, actor, and presenter Dominic Frisby. As well as his work in comedy, Dominic has written several books on the subject of finance and economics. His first book, Life After The State was called 'Extraordinary' by the director of BBC News.

The show's resident economist is Dr Natalie Quinn, a Career Development Fellow in the Department of Economics at St. John's College at Oxford University. Her lectures focus on Economics of Developing Countries. She received her degree from Oxford University and, in 2014, won the OUSU Student Led Teaching Award for Outstanding Tutor in Social Sciences.

The rounds are titled: Who's Got the Bigger Paycheque?; Countries Export; This Little Piggy Went to the Black Market; Penny Pinching Tips for the Planet; and Selling Ice to Eskimos.