More Lines From My Grandfather's Forehead 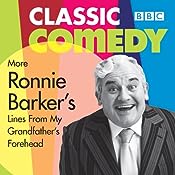 Ronnie Barker stars in four episodes of the comedy sketch show - including a Christmas special - as heard on BBC Radio 4.

Here's a further cornucopia of clever comedy, featuring sketches, monologues, poems and songs in this 2sequential entertainment for radio". The office party is given a new take and you'll also find these subjects among the sketches on this recording: a day trip to Boulogne, Mr Perch, Edwardian soiree, marriage, the end of the world, the connoisseur, as per estimate, population control, baby-care, a night at the ballet, duel and plain speaking. As well as a special take on Hamlet, there are also the poems The Audience and Curtain.