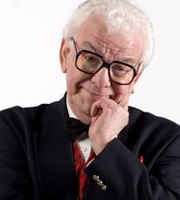 This year the compere is the King of Comedy himself, our own Barry Cryer. The veteran comedian strolled on to the stage, insisting that he is "a gag man" and compering was "not his forte", but in fact he was brilliant, regaling the audience with anecdotes and shaggy dog stories, delivering even the corniest of jokes with great panache.

The acts he introduced varied from local stand-up the anarchic Jim Smallman, revealing his many tattoos, to ventriloquist Nina Conti. Ventriloquism on the radio? Well Archie Andrews managed it for many years!

Nina, and her side-kick, a depressed monkey puppet named Monk, were much more daring than Archie though, and their act was intriguing to say the least.

A performer whose set I very much enjoyed was a relative newcomer to comedy, Marlon Davis. His was an engaging and energetic act, peppered with plenty of sharp gags and skilful characterisations. Keep a look out for Marlon, as I believe he is a rising star.