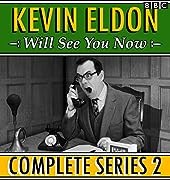 Comedy's best kept secret ingredient gets another series of his own hit sketch show. This is the complete second series, containing sketches, characters, sound effects, a bit of music, some messin' about, you know...Kevin Eldon is a comedy phenomenon.

He's been in virtually every major comedy show in the last 15 years, but not content with working with the likes of Chris Morris, Steve Coogan, Armando Iannucci, Harry Enfield & Paul Whitehouse, Stewart Lee, Julia Davis and Graham Linehan, he finally decided to put together his own comedy series for BBC Radio 4.

In the first episode, we meet Kim Jong Un's haircut and David Livingstone's trousers, plus we extol the wonders of drink and sneezing.

Episode two, and we get to shape some hedges, eat some cheese,and play an exciting round of Ten Man's Nancy.

In the third episode, if you've ever been abducted by an alien, had an idea for a novelty teatowel or simply love escarpments, then this is the show for you. It's also the show for you if you don't have any of the afore-mentioned qualifications.

And finally, in the fourth episode, carpentry, subatomic physics, Winston Churchill and how to deal with troublesome slugs all come under the microscope. Not really the best instrument for examining any of these things, one would've thought, but there you go.