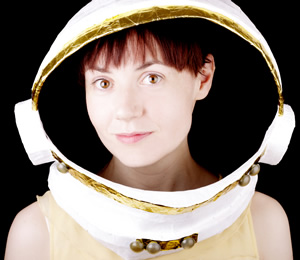 We managed to get Helen Keen to stop looking up at the stars for a moment and tell us a bit more about her radio show, plus answer some of our naïve questions about space travel...

Hi Helen. This is probably a dumb question to ask but, err, what is 'It Is Rocket Science!' about?

It's a low budget highly subjective look at the history and future of space travel - particularly the peculiar and, sometimes to be honest, bit sinister people who were the pioneers of rocket travel...

Have you always been interested in science and space?

As a kid I had phases when I was absolutely obsessed with space (I think that's quite a common experience) and I remember dragging my dad outside through night after night of Yorkshire drizzle in an attempt to see Halley's comet (quite ambitious in 1984). I did my degree in English Literature, so I can't claim to have anything more than a basic grasp of the science end of things, but I think what captured my imagination as an adult was reading about how the first rockets were built. They're a real triumph-over-adversity stories - lots of slightly eccentric men with ahead of their time science fiction-y dreams, obsessing over how to turn them into reality (while pretty much everyone else either laughed at them or ignored them).

If, say, entirely hypothetically, you've left university with big, elaborate dreams of conquering the world and found yourself working as a temp, photocopying for £6.75 an hour to pay the rent on a damp bedsit in Acton and contemplating failure daily then that's the sort of story that makes an impression...

Does it frustrate you that you're unlikely to ever be able to go into space yourself?

Well obviously I'm hoping that Richard Branson will be such a fan of the series that he'll offer me a free trip. Virgin Galactic did actually give me some very cool biros & temporary tattoos when I was performing the first show previews, so really it's only a matter of scaling that up... 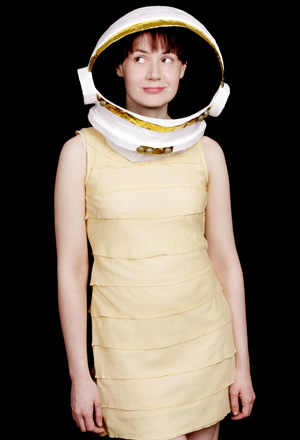 Branson can't even get the trains working between London and Manchester, so be wary about getting on his spaceship! So... big topic, do you think there are aliens out there in space Helen?

Yes, personally, I do. Very excitingly at the moment the early data from the Kepler Space Telescope suggests lots of extrasolar 'planet candidates' - many more than initially thought. There's still a lot of work to do, of course, but I guess we can be optimistic about the odds of finding - eventually - a planet with some sort of life on it, or that could at least support life as we know it...

That is quite exciting. Talking of funding space research: all that money that NASA spent on those special pens that would write in space... what a waste yeah? They could have just used pencils?!?

Ah, you see, they didn't do this - it's just one of the many myths about the American space program...

Ah, sorry, we feel suitably sheepish now. Moving on... although your show is primarily a comedy, you've managed to pack some interesting educational teachings in it too. Do you have a favourite space travel fact or related bit of trivia?

One of my favourite bits of trivia actually isn't in the show: Apparently, nutritionists in the early days of the space program were very concerned about the practicalities of eating in orbit - how to cope with the additional weight of food you'd have to send up for astronauts, how to make it palatable and what to do with the... um, inevitable consequences of eating (especially troublesome in a weightless environment).

Some really far out brainstorming ideas were considered including sending up obese astronauts with no food supplies at all and just having them starve until they came home. Someone went as far as calculating that a person with 20kg of fat carries reserves of 184,000 calories and could live off their body fat for 90 days. (The difficulty of course would be finding people like that in America...)

Ha ha. This radio series is based on your Edinburgh show. Obviously it's quite an intelligent show, did you ever have to play to any unsuitable crowds, for example drunks, whilst at the festival?

I was in a lunchtime slot, so I don't really have horror stories about dealing with drunks, etc. You'd have to be fairly committed to fucking up someone's performance to get raucously slaughtered by 11.30am then queue to buy a ticket to a show with science in the title.

In fact, the biggest risk with an early show is that most people won't get up in time to see it. It's become a far more popular time over the last couple of years though - I guess because it's relatively cheap. I remember in my first year pretty much the only other comedy show on at the same time as me was by Jim Bowen and I don't think we were necessarily aiming for the same demographic. Since Edinburgh I've performed all over the shop at all hours of the day, but a rowdy crowd of fellow space geeks and nerds is still going to be a joy to perform to, quite honestly. 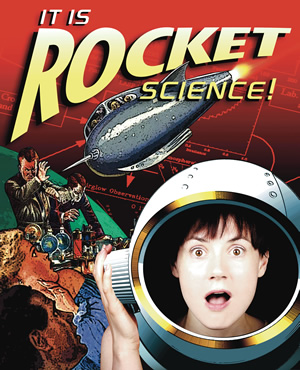 Good answer! This is your first radio series. How did you find the process of making the show?

Although it's taken a while to come to this stage, I think the development process was actually pretty smooth. It was my first ever hour show and I took it up to Edinburgh in 2008 - rather naively in retrospect, with no real plans for how to get people to come and see it. But I suppose because it was an unusual idea and because so many people are, like me, a little bit obsessed with space, we had really good audiences and a lot of interest from production companies.

Gareth Edwards came to see the show towards the end of the run, which was brilliant because he's someone who'd produced such amazing comedy shows, so he was on my dream 'would love to work with' list. (Though I would never have dared approach him!) He suggested I should try to turn it into a radio show, but it wasn't until the next year that my writing partner Miriam and I wrote the pilot. The live show's quite visual, with lots of silly props and shadow puppets, so working out the best way to adapt it for radio without that element was really the hardest part. Once we'd solved that problem, the rest all seemed to happen fairly easily.

We kept pessimistically expecting each stage in the commissioning process to be its last, but the show just went on and on being accepted. Even on the day of the recording Miriam and I were convinced the BBC Radio Theatre would be half empty because it was the week after that massive snowfall and we hadn't told anyone about Peter Serafinowicz being in it until that morning - but, in fact, the audience were queuing round the block - phew!

As you mention, you've got Peter Serafinowicz providing voices, alongside Susy Kane, plus the very experienced Gareth Edwards as producer. What was it like working with them?

I really couldn't have wished for a better, more talented (or in fact nicer) group of people. (And I'd also include the excellent Lyndsay Fenner, our broadcast assistant, on that list.) On the day of the recording Miriam and I were still re-writing the scripts and were so nervous we were barely able to function, but, because everyone else was so experienced, they were a brilliantly sane group of people to be hanging round with.

I love making costumes though, and Peter was playing the part of a computer-narrator I'd built in my bedroom, so retrospectively I regret being too starstruck to ask him to wear an outfit made of tinfoil covered boxes and wire coat hangers for the duration of the recording.

Ah, maybe next series! If people are inspired by your show and want to find out more about space, what would you suggest would be a good starting point?

In The Shadow Of The Moon is a beautiful, funny, moving and inspiring documentary about the moon missions - and the Apollo astronauts come across as charming and self-effacing.

A relatively recent discovery for me is Mary Roach - I wish I'd know about her book Packing For Mars before we wrote the show! It's full of witty, interesting detail about the most bizarre areas of the space program (the starving obese astronauts story comes from her book).

And finally Marcus Chown - who very kindly read through Episode 4 to make sure there weren't any glaring errors. He writes fascinatingly about space science - I'd particularly recommend The Universe Next Door.

Ooh - and can I just plug one other thing? I'm going to be hosting (along with Matt Brown - editor of Londonist, former editor at Nature and all-round space nerd) an event celebrating the 50th anniversary of the first ever human spaceflight by cosmonaut Yuri Gagarin on April 12th at the Camden Head. Details here

Nice one. Thanks again Helen, and all the best with the series!