About I'm Sorry I Haven't A Clue 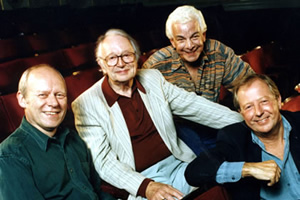 The antidote to panel games - I'm Sorry I Haven't A Clue is one of the most respected and popular comedies on radio. Having started in 1972, it is one of the few comedy shows that is pretty much universally accepted as being very funny.

The show was developed from the radio sketch show I'm Sorry, I'll Read That Again, which featured John Cleese, Jo Kendall, David Hatch, Bill Oddie, Tim Brooke-Taylor and Graeme Garden. The idea was to develop a show that was unscripted, but unlike other panel games at the time, to make it complete nonsense. Jazz musician Humphrey Lyttelton was chosen as chairman because they felt that the improvisation was rather akin to a comedy jazz style. However, Lyttelton alternated with Barry Cryer as host for a few episodes.

Many of the early episodes were wiped by the BBC, however some have been recovered, including the first episode, which features amongst other things Oddie and Brooke-Taylor singing 'Sing a Song of Sixpence' to the tune of 'These Foolish Things'.

In 1974, a regular panel had been organised. The panel became Barry Cryer and Graeme Garden on one side, and Tim Brooke-Taylor and Willie Rushton on the other. The panel remained the same up until Rushton's death in 1996. Since then, a guest took the fourth position. Past guests have included Paul Merton, Stephen Fry, Jeremy Hardy, Andy Hamilton, Tony Hawks, Phill Jupitus, Linda Smith, Rob Brydon and Harry Hill. Some famous comedians have said that they did not want to appear on the show for fear of spoiling it.

Other contributors to the show include Colin Sell, the pianist who is normally mocked by the host, and the programme's fictional scorer Samantha. There is also one more regular (fictional) contributor, a Mrs Trellis of North Wales, who often writes in. Past letters include, 'Dear Mr. Rumsfeld; Congratulations on the accuracy of those new smart bombs of yours. The one that landed in our vegetable patch landed smack in the middle.'

The future of this comedy was in doubt after the death of long-serving host Humphrey Lyttelton. Many thought that the BBC would retire the format because it was seen as being very difficult, if not impossible, to find someone to replace the late, great Humph. However, a new series was recorded in Spring 2009 with guest presenters Stephen Fry, Jack Dee and Rob Brydon. The reception to this series was muted, but following this it was decided to make Dee the regular host, which appears to have been given approval from most fans. 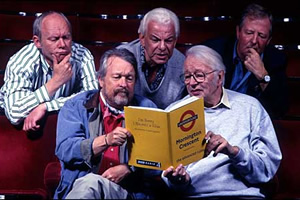 The show features a wide range of different games, although no points are really given and it is solely for the purpose of being silly. Games include:

- Mornington Crescent - Believed to have been created by producer Geoffrey Perkins, this is a game based on the London Underground with rules that are incredibly hard to understand, therefore making the game almost impossible to play.

- One Song to the Tune of Another - A game in which the premise is in the title, but the host constantly feels the need to explain using complicated analogies.

- Pick-up Song - A musical game, which in the early days of the show involved one panellist singing a song and then stopping at any word they liked. The next panellist had start with a different song beginning with same word as the last word in the previous song. In, the modern version, first known as Sing-a-long, the players sing along to some well known records. The record is then faded out and the panellist tries to keep at the correct pace. The winner often receives some sort of stupid prize such as lawn seed that makes your garden look bigger (a magnifying grass).

- Cheddar Gorge - Here, the panel construct a sentence taking one word at a time whilst trying to avoid completing the sentence. This round has since been replaced usually by Historical Correspondents which follows the same rules, but the situation is between two historical figures writing letters. However, Cheddar Gorge does sometimes reappear.

- Historical Headlines - The panel try and guess how today's newspapers would have covered historical events. For example, the Great Fire of London (The Scotsman: Tee, Hee, Hee).

- Word for Word - The opposite of word association. The panel list words that are completely unconnected.

- Sound Charades - The show's tribute the TV quiz show Give Us a Clue (and the expert's expert Lionel Blair) where players mime titles of books, films and so forth to great amusement. This version differs in just two ways. The game gave rise to Cryer and Garden's Scottish characters Hamish and Dougal, who later went on to have their own spin-off radio show: Hamish and Dougal: You'll Have Had Your Tea.

- Limericks - An old round in which the panel are given the first line of a limerick and each member creates the five-line poem taking one line at a time.

- Swanee-Kazoo - The teams play a song on the swanee whistle and the kazoo.

- Just a Minim - A parody of Just a Minute, in this game the panel try to sing a song without repetition, deviation or hesitation. Since becoming chairman Jack often mocks Nicholas Parsons's luvvie style of presenting.

- Late Arrivals - The team welcome the late arrivals at a society ball for a certain group of people. For example, builders. Late arrives could include Mr and Mrs Neepot and their son Jim, or Mr and Mrs Bennett-That's-Twice-The-Estimate, and their son Gordon.

- Songbooks and Film clubs - Akin to "Late Arrivals", the songbook round have to suggest songs likely to please a certain group, whereas in the film club round the panel have to suggest films likely to please a certain group. In the film club version Graeme often always makes a reference to film Bring Me the Head of Alfredo Garcia.