Giles Wemmbley Hogg returns, having set up his own travel company. A struggle takes place between the Apollonian and Dionysian principles, as Giles travels to Greece on a desperate rescue mission and eats far too much halloumi.

Giles visits Iceland and buys some frozen food for his trip to Lapland. He also learns that, when hunting with shotguns, it's good to know the difference between an elk and an elf.

Giles takes four cross ladies and a piece of lead piping on a septuagenarian trans-Balkan hen party with an Agatha Christie theme.

It's Viva Las Vegas as Giles accidentally gets three wives in a row and loses the jackpot. 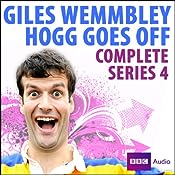 Giles has been grounded! Budleigh Salterton's most famous citizen has been forced to stay at home by the Home Office - and his father. But something minor like that won't dent Giles's enthusiasm, so in this fourth series of Giles Wemmbley Hogg Goes Off, he sets up GWH Travvel ("two...