Tamsyn is not pleased, as yet again she's failed to win the coveted 'Smuggling Personality of the Year' award.

Major Falconer attempts to become more of a cad to win Tamsyn, but she is more concerned that her disloyal fans are being poached by 'Boyz 2 Rob', the hunky band of highwaymen that are taking Drumlin Bay by storm.

Tamsyn has been captured by the revolutionaries, and faces an excruciating torture involving a shuttlecock, some badminton rackets, and two fat naked Germans.

It's Jester's Relief week in Drumlin Bay, and Tamsyn is a bit tired of raising money for the people of Devon, just because their clotted cream is slightly less clotted than the Cornish equivalent.

Jago has been kidnapped and taken to London, but Dewey is far more interested in seeing 'Bedlam' ('Looneys, Looneys and More Looneys' - the Times) which is now in its sixth record-breaking year.

Tamsyn's mother 'Lizabeth suddenly turns up at the tavern - after it was thought she had drowned fifteen years ago - and greets Tamsyn with the immortal phrase... 'Ello Princess...' 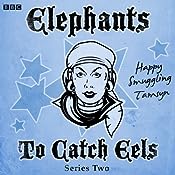 The BBC Radio comedy set in an 18th century Cornish village - written by Tom Jamieson and Nev Fountain and produced by Jan Ravens. Starring Sheridan Smith. From April and May 2004.

In the complete second series, smuggler Tamsyn Trelawny wants to win 'Peasants Personality of the Year', her head...