Tamsyn Trelawny's existence as a smuggler is threatened by the arrival of a new customs inspector.

Will Tamsyn be persuaded to appear on the expert panel at the convention for smuggling enthusiasts?

Tamsyn and Jago's smuggling exploits are to be chronicled by a group of fly-on-the-wall balladeers.

The new editor of 'The Times of London' undertakes to boost circulation by turning the respected newspaper into a gossipy rag.

Tamsyn, fed up of doing all the smuggling and getting none of the credit, decides to quit. Then a new smuggler arrives in town.

Tamsyn has joined the preventives in order to get rid of Kate, who is top of the smuggling charts and engaged to her dad. 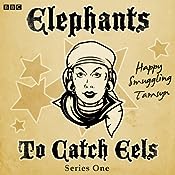 The BBC Radio comedy set in an 18th century Cornish village - written by Tom Jamieson and Nev Fountain and produced by Jan Ravens. Stars Lucy Speed. From February and March 2003.