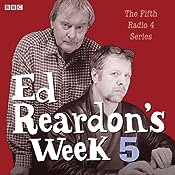 Ed Reardon, author, pipe smoker, consummate fare-dodger and master of the abusive email, attempts to survive in a world where the media seems to be run by idiots and lying charlatans.

In these six episodes, Ed and Mary Potter are in a record breaking second month of partnership 'bliss'. But work isn't going so well: it's time for Ed to drag out the old jeans, buy a mobile phone and cut ten years off the CV as the new Head of New Media Development is a genuine 12-year-old. And after a run-in with the Head of Stakeholder Communications Engagement at a local council meeting, Ed finds himself in anger management classes.

Plus, Jaz suggests that Ed revive one of his old stage shows, 'Educating Peter'; Ed finds himself writing for a local lifestyle magazine when everyone at the agency goes on holiday; and finally, he is visited by his new grandson Smile and is inspired to write a children's book. However, his daughter is not at all impressed with his flat.