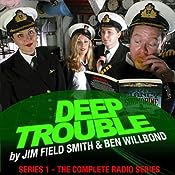 February 2012. Somewhere in the North Atlantic. In an increasingly uncertain defence environment, a deadly new arms race has begun. In an attempt to secure her boundaries, Britain has deployed the very latest sub-sea military technology. Beneath and beyond the front line, these are the adventures of the HMS Goliath. A 55,000 tonne M-Class nuclear stealth submarine, prowling 5,000 metres below the surface, manned by idiots.

A hilarious sitcom that Time Out called "a cracker" and the Sunday Telegraph described as "written with nutty aplomb", Deep Trouble is written by and stars Ben Willbond and Jim Field Smith.

This is the complete Series 1. In the first episode Captain Wade discovers that coffee and torpedoes don't mix, Lieutenant Jack Trainor accidentally finds the exit door and Commander Alison Fairbanks gets involved in a food fight. In Episode 2, a team of US Navy SEALS descend on the ship, causing sinews to stiffen and hearts to flutter. In Episode 3 a visit by the admiral throws the boat into chaos, as well as ruining a Sea Harrier, a Russian S200 submarine and a perfectly good stationary cupboard. Finally in Episode 4, it's homeward bound, as a stray astronaut and a rock band cause confusion in both Captain Wade's head and Portsmouth...