Dad's Army is best known as one of the most successful, most popular and longest-running sitcoms made in Britain. Almost everyone in the country is aware of the famous television series, but there was also a radio series which is less well known.

The radio version of Dad's Army followed the same premise as the TV series. It featured Captain George Mainwaring (Arthur Lowe) as commander of the Walmington-on-Sea Home Guard, alongside the usual members of his platoon. However, that is not to say that both versions were identical.

The Move to Radio 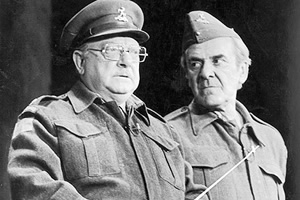 There were some obvious difficulties with adapting the radio series. For starters, Knowles and Snoad had never done a television-to-radio adaptation before, and so were unprepared for many of the problems they would have to face. One issue they quickly encountered is that Dad's Army contains lots of moments that rely on visuals.

The most notable of these was 'The Day the Balloon Went Up', in which the platoon finds a runaway barrage balloon and try to release it safely, only for Mainwaring to be still holding onto it when it flies away. When they tried to adapt the episode, many claimed that it could not be done. However, Knowles and Snoad did manage to it, with much help from their producer, John Dyas. The solution to the problem was to have both Mainwaring and Lance Corporal Jones (Clive Dunn) on the balloon, so that the two could talk to each other about the troublesome situation.

Sadly, some episodes were so visual that they were never adapted for the radio. Examples include 'My Brother and I' in which Lowe played both Captain Mainwaring and his black sheep brother Barry, and 'Gorilla Warfare' which involved one platoon member not realising a man in a gorilla suit was creeping up on him. Out of the 80 television episodes, 13 never made it to radio.

Another major problem was the death of James Beck, who played the role of Private Walker. Beck only managed to participate in the first eight episodes of the first radio series before his untimely death. However, unlike the TV series two actors (Graham Stark and Larry Martyn) were brought in to replace Beck as Walker. The main reason the part of Walker was re-cast in the radio series was because most of the series had been written, and in many episodes Walker was a central character, such as 'The Loneliness of the Long-Distance Walker' in which the private is called up into the regular army. As a result of this re-cast, there are a few radio episodes which have Walker in when the TV version did not, such as 'The Recruit'.

There are other differences between the mediums. In the TV series, Private Godfrey (Arnold Ridley) had two sisters, Cissy and Dolly, but in the radio series Dolly is never mentioned. Some names were also changed. There were two different town clerks in the television series; Mr Rees and Mr Gordon. In radio, there was only one, Mr Upton. The reason for this name change was a different actor was brought in to play the role, and so Dyas changed the name in order not to cause offence to the original actors. Episode titles were also changed to make them clearer. For example, 'The Desperate Drive of Corporal Jones' became 'A Question of Reference', because the episode involved a map reference being given incorrectly.

The series ran for three series over three years, finishing in 1976. However, this was not the end of Dad's Army on radio. Knowles and Snoad continued to write for some of the characters. This resulted in a spin-off series called It Sticks Out Half a Mile. Set after the war had ended, it was originally intended to star Arthur Lowe and John Le Mesurier as Mainwaring and Wilson, but Lowe died after the pilot was recorded, so Ian Lavender and Bill Pertwee we brought back to play the roles of Pike and Hodges. There were some attempts to adapt this spin-off for television, but none of the projects met with success.

The last Dad's Army visit to radio was as recent as 1995. A ten minute sketch for the BBC Radio 2 show Last Night at the Paris was made, featuring the characters of Pike, Hodges and the Vicar (Frank Williams), as well as an appearance from Perry.