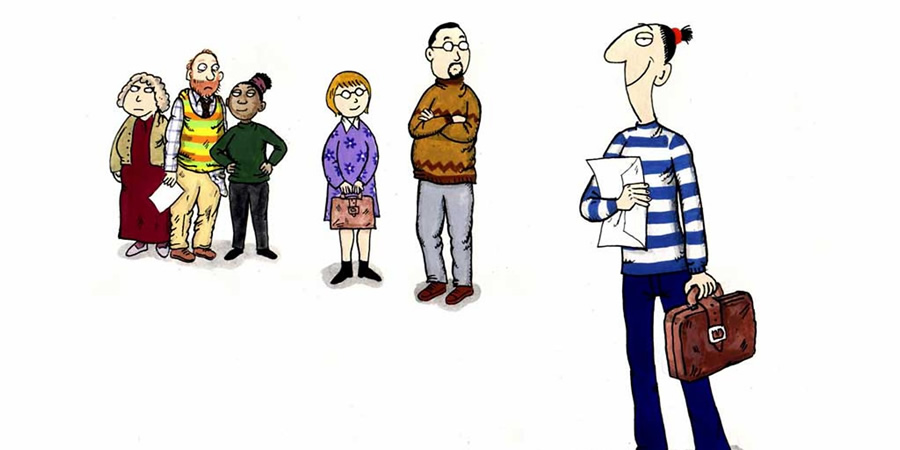 About Clare In The Community 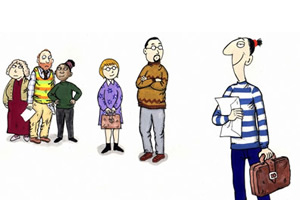 Clare in the Community was created by actor, reviewer and, most notably, illustrator and cartoonist Harry Venning (born in Wembley 1959). It was originally designed as a cartoon strip for the social work magazine Care Weekly but publication of the magazine was stopped after just six weeks. The strip later transferred over to The Guardian newspaper in 1996, which has been its home ever since. It can be found every Wednesday in the society section of the newspaper. Venning also writes the Hamlet cartoon strip which can be found in The Stage.

The radio version of the show began in November 1996 when a social worker who was reading The Guardian told her son Anil Gupta, a producer at the BBC, about the cartoon strip. Gupta thought that it had potential to work as a comedy and so sent the writer a letter, asking if they could arrange a meeting to discuss adapting Clare in the Community into a television sitcom. At first Venning thought that the BBC wanted to just buy the idea, when in fact they wanted him to write the scripts too. When he realised this, Venning called up his friend and writing partner David Ramsden to help work on the script.

The techniques that Venning and Ramsden used to write the script consisted of watching episodes of Friends, Seinfeld and Frasier as "research", having a moan, followed by a one hour writing session at the computer, before going to the pub for another moan about how hard it was to write a sitcom.

After the first script was written, which was a pilot introducing each one of the characters, a meeting was called up between Venning and Ramsden and the head of BBC comedy, Geoffrey Perkins, to discuss the project. The reaction from Perkins was disappointing, the executive said that it wasn't a script but "a string of jokes, with dialogue in between." Gupta convinced them that Perkins actually thought that their script was positive so they were sent away to write another script. The method of moaning and "researching" other sitcoms had now proved successful. The next script that the duo sent to the BBC was impressive and worthy of a read through. Gupta organised some casting sessions and the script was performed in front of an invited audience in the BBC rehearsal rooms in June 1998. The first person to take the lead role of Clare was the actress Nicola Walker (Spooks, Dalziel and Pascoe) who "... combined deadpan and sexy to devastating effect." The performance was watched by the BBC commissioning editor and controller of BBC1, Peter Salmon. The overall impression from the small audience seemed to be satisfactory but Salmon didn't enjoy the idea of a social worker sitcom. He didn't think it was a winning idea and so wanted another script from Venning and Ramsden. By the time the writers had come up with a new episode, it was eighteen months later and the BBC had moved on. Anil Gupta began creating his own production company and the BBC had left them behind. Gupta presented Venning and Ramsden with an agent, as he was now too busy setting up his company.

During 2000 and 2001, Venning and Ramsden were contracted by controller Sioned Wiliam at ITV who seemed impressed with their script. They later approached Tiger Aspect Productions, who agreed to produce the show. The second person to take the role of Clare was the comedic actress Julia Sawalha (Absolutely Fabulous, Jonathan Creek) who "turned in a characteristically brilliant performance." The audience reception of the pilot was optimistic and so the twenty two minute sitcom was sent to David Liddiment (who was, at the time, head of ITV). It took months for Liddiment to finally get round to watching the episode but, when he eventually did, his response was positive. However, only days later, he was sacked from his job and any hopes of broadcasting the show pretty much disappeared. The pilot was never broadcast and ITV and Tiger Aspect dropped Clare in the Community.

However, in December 2003, BBC producer Paul Schlesinger suggested to the writing duo that they should try to create Clare in the Community as a radio programme. As Harry and David were both keen radio comedy fans, they took the offer and were commissioned to write a six-part radio series adaptation. They had written six episodes within six months. In 2004, Clare in the Community was finally on air, this time with comedian Sally Phillips (Smack the Pony, Green Wing, I'm Alan Partridge) in the title role. Her "odd brand of narcissistic benevolence" was prasied as being "the lynchpin to this excellent show." Series 1 proved to be an immediate success, and sported other famous talent such as Nina Conti (stand-up comic and ventriloquist); Alex Lowe (Fun at the Funeral Parlour, The Peter Serafinowicz Show); Richard Lumsden (Is It Legal?, The Catharine Tate Show); Andrew Wincott (Adam in The Archers); Ellen Thomas (Teachers); and Gemma Craven (The Clinic, an award-winning Irish television medical drama, Pennies From Heaven and two time guest on The Morecambe and Wise Show). Liza Tarbuck (Linda Green, Bonkers) took over from Gemma Craven from series 5 onwards. Sarah Kendall (Beehive and Australian stand-up) plays a new character after Ellen Thomas' departure after Series 5.

The producer for the show is Katie Tyrrell (The Now Show, The News Quiz). Described as "infinitely patient, endlessly resourceful and multi-talented", Tyrrell helped the sitcom win bronze in the Sony Radio Academy Awards of 2005. The Sony Radio Academy Awards said that the series had "A completely engaging narrative, beautifully observed characters and lots of very funny material."