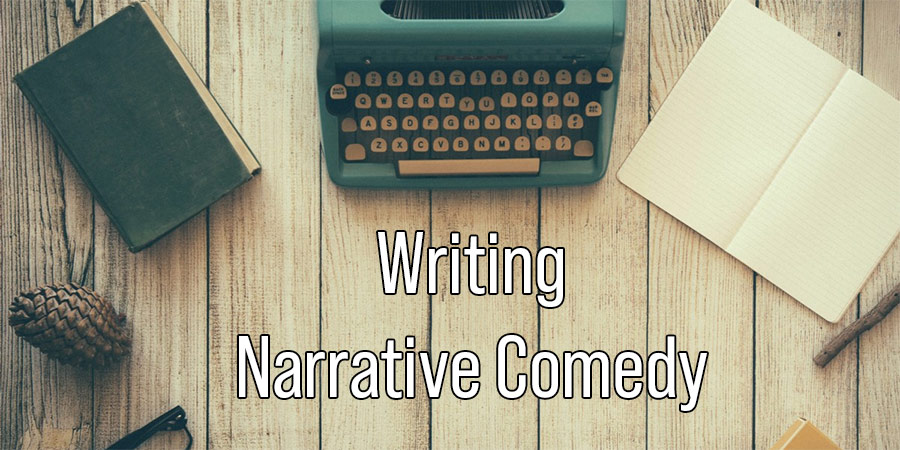 Watch Chris talk about the course:

Weekly live Zoom sessions led by Chris Head with a friendly group, featuring TV comedy clips that are analysed and discussed with a Trello board of notes from each session and catch up videos of the classes.

This online course will equip you with the essential tools for writing sitcom and comedy drama. You might have an idea in mind already that you want to develop and write, a draft of a script that you want to rewrite and enhance - or even no specific idea at this point. (If this is the case, the course will definitely give you ideas!).

Here are the main tools you'll acquire or sharpen on the course (and there are more!).

* TOOL: POV - how to create comedic points-of-view and how the unreasonable/ reasonable POV dynamic can fuel your comedy scenes.

* TOOL: 'Stuck-in-the-middle' - a classic comedy character dynamic where a character is caught between two extremes.

* TOOL: Dramatic irony - this is a classic dramatic tool and absolutely essential for comedy.

* TOOL: 3 levels; bringing three levels to a scene to add dynamism and comedy.

* TOOL: Bathos. Bringing in serious topics and using bathos as a way of finding the comedy in dramatic or serious situations.

* TOOL: Pathos. Positive emotions in your script and characters making each other feel better in sad situations (comedy is so much about conflict but this flip side can bring heart and pathos to your show).

* TOOL: Montage. A classic narrative tool and how you can use it in comedy drama and sitcom.

AND MORE! Plus At the end of the course we'll also look at how to write a treatment.

As well as providing you with a complete set of essential tools, on the course you will write a lot of funny scenes with your characters without worrying initially about where they’ll slot into a story. You'll simply be working with that week's tools. This freedom will allow you to make discoveries of scenes and situation that will be highly useful to your script and will take your characters places you’d never considered. If however you have a much clearer idea of where your script is going from the outset, you can use the tools in the places that are most relevant for your developing story.

And it's not only for beginners. More experienced writers have done the course and have appreciated the fresh perspectives and also the greater clarity on tools they had been using but without such a clear understanding of what they are and why they work. And, whether new or not, it will get you writing a whole load of new scenes and creating situations and comic scenarios that you wouldn't have thought of without the stimulus of the course.

On the course you can either:

Work on an existing idea and develop the characters and world, creating new scenes, scenarios and stories.
Or you can start on an entirely new idea.
Either way, you'll be working closely on the one show idea thoughout the course while learning the tools that you can apply to any idea.

How it works
Each class is made up of weekly 2 hour Zoom sessions which are supported with follow up notes and discussion on a Trello board. The online classes are fully interactive and creative. Relevant comedy clips illustrating the tools are shown, discussed and analysed. You'll undertake creative exercises tailored for the online environment to explore the tools and techniques we're working with. There are also breakout periods for you to create something to bring back and share with the group. Throughout the classes you'll receive immediate, helpful and inspiring feedback on your developing work. The sessions end with homework being set and then you have the week between sessions to work on the comedy writing task. You submit your work in advance of the next session for personalised feedback. You will also receive detailed notes on the topics covered after each session.

"Really liked the combination of very well chosen comedy clips, practical exercises and discussion. The sessions flew by, and having weekly homework kept me focused, gave me structure and kept me writing. The course was packed with useful tips and information from beginning to end. Having previously studied creative writing, it was great to think specifically about comedy writing and learn about some of the common techniques and devices that are commonly used in a comedic setting as these are very different from the hero's journey! " JH

"This course was so useful for guiding me through the process of developing a comedy script for television. Each week we were set different homeworks that got me into the rhythm of writing much more regularly. Chris has a great manner and clearly many years of invaluable experience in the industry. The fact that it was online made it much more accessible, as we were able to all be in different cities, countries even and share our ideas. I highly recommend this for anyone serious about developing a treatment and script for TV. " JM

"I came to the course with a genuine interest and passion about situation comedy, but no experience in writing it professionally. I found that the course built my confidence, particularly with the homework exercises and feedback, and opened my eyes with regards to structure and the approaches to building up scenes into a world of relatable characters. I now feel I have the tools to work on a pilot and treatment to eventually send out to producers. That's quite an achievement for one course!" PF

"Chris had us learning about our characters by putting them into scenes from week one. There’s none
of the usual tedious prep work of writing character lists. Instead we spent time analysing clips from sitcoms – each week we were given a homework task which usually involved writing a scene inspired by those that we’d watched in class. The feedback on these scenes was very useful! Chris knows how to alter a scene to make it funnier or just make it work – and by the end of the course, you will too!" CR

"I can't speak highly enough of how positive I've found the sessions with Chris. The sessions have changed how I view comedy and have given me real insight into how to better turn ideas and funny thoughts into character driven narrative comedy. It's also great to learn remotely and know I can ask questions through the Trello board and rewatch sessions. If you've ever wondered should I give it a go the answer is yes and do it!" SM

This is an Aussie friendly run of the course at 7pm Australian time - 10am UK time.
UK students (or other time zones) are welcome too BUT NOTE THAT THE TIME LISTED IS AUSTRALIAN TIME (Eastern Standard Time).

No session on 25th January. (Due to Chris being in Bath for his BA Comedy Students' stand-up showcase!)
Which for you means a handy 2 weeks writing time between sessions.

Teacher Chris Head is a comedy director, script editor and author. His second book "Creating Comedy Narratives for Stage and Screen" has fresh and inspiring insights for writing sitcom and comedy drama, alongside sketch and stand-up. Recent clients have had comedy drama sitcom scripts commissioned by Channel 4 (Chris script-edited one of these), a sitcom pilot broadcast on BBC Radio 4 (that he script-edited) and have been amongst the winners and shortlisted writers in the BAFTA Rocliffe comedy writing competition. Other clients have had comedy plays at the Edinburgh Fringe and Soho Theatre (that he script-edited and directed), have won Sitcom Mission and have had a commissioned sitcom on Channel 5. He also ran the Yellow Door script competition with BCG where the winners aer having scripts developed by Lucy Lumsden and Chris, to pitch to channels.

"Chris is patient, kind and thorough. His classes are excellent, he gives useful examples to help us understand each lesson. The fact that all my classes were over Zoom took nothing away from the learning experience. Chris also gave really constructive and thoughtful feedback notes on everyone's work. I absolutely recommend the course." FK

"I felt compelled just to say that I'm thoroughly enjoying the course and breaking the writing process down and learning new terms and models is very, very helpful. Thanks very much! The one complaint I have is that I now have WAY too many ideas for my first episode!" edy writing and story but this course taught me lots of new tips, tricks and techniques for writing sitcoms, creating characters and scene development. The course was enjoyable, learning with other like minded people and gave us insight into how the industry works too” MG

"Having just completed a Comedy Narrative and Stand Up courses with Chris Head I feel like I’ve been gifted with a chest of secret comedy techniques. His teaching is motivational and rich in content. I really will be unpacking this for some time to come. His knowledge on comedy is vast with clear teaching methods for the mechanics, I still can’t believe how much work I have been able to produce in such a short amount of time" DB