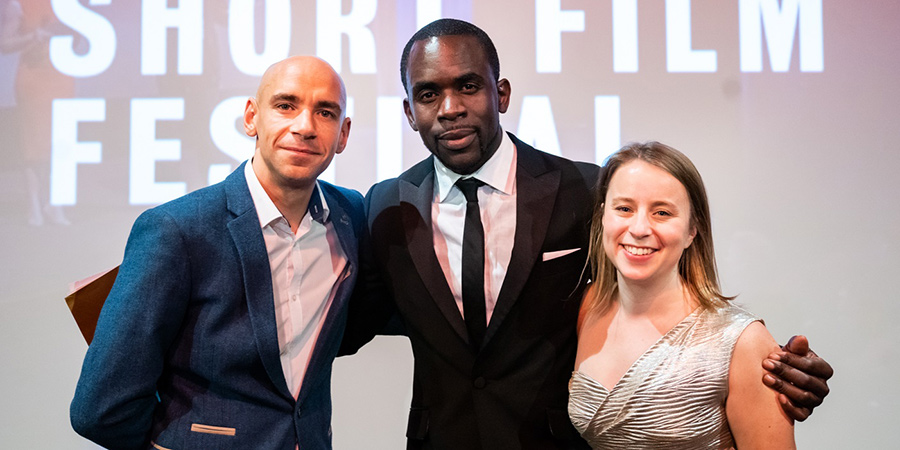 The TriForce Creative Network has been at been working tirelessly to improve diversity in areas such as acting, producing and directing. Fraser Ayres and Minnie Ayres from TCN explain more here:

What is the TriForce Creative Network?

Fraser: The TCN was formed in 2003 by myself and Jimmy Akingbola in response to the problems we saw in our industry back then. We wanted to set up an organisation that would address the lack of diversity in the industry, both in front of and behind the camera.

Minnie: And not just in terms of ethnicity, but in terms of social mobility, the lack of representation of people with disabilities, the gender disparity, all of it. Our industry was very much 'one -tone'. We started with networking events. 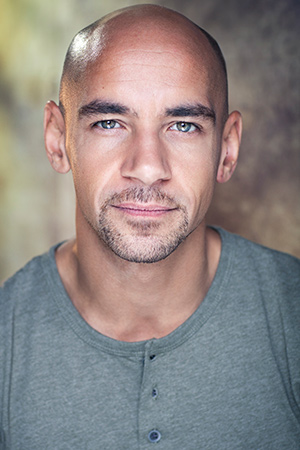 Fraser: They were club nights...

Minnie: And we'd put the talent in front of the decision makers in a social setting and cut out the need for drama schools, or money or getting a shot because your relative is in the biz.

Fraser: We then began MonologueSlam across the UK for actors. Always keeping everything free to get involved in so there were no barriers.

Minnie: We pride ourselves on the fact we've never charged the talent. Not a membership fee or a commission, and now our network is 60,000 people from all walks of life from across the UK.

Fraser: Following on from the success of MonologueSlam we created WriterSlam for writers.

Minnie: Plus, we also have The TriForce Short Film Festival for emerging film makers, Dandi.org.uk - a recruitment service for off screen talent, and of course, TriForce Productions, which is what we made [current ITV panel show] Sorry, I Didn't Know through.

How do you think the TV industry is currently doing, in terms of diversity on screen? And what about off-screen roles?

Fraser: That's an interesting question with where we all find ourselves right now. If you'd asked me 6 months ago, I would have said what I always say when asked if the TV industry is doing well in terms of diversity, but after the events of this year, things have indeed changed. 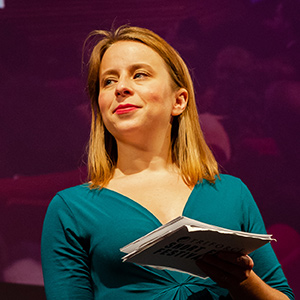 Minnie: It's not that we're in a golden age of inclusion, but the conversation hasn't gone away this time, and that's meant that the window to get more done has been open for longer. Through Dandi, we've been able to place more people into senior roles, decision maker roles, than ever before. These are the people that will change the face of our industry and what they needed was access, and we're able to provide that on an unprecedented level at the moment.

Fraser: That's the long-lasting change that's needed. The people who have been 'let in'? Well, we're not going anywhere now!

Tell us more about how you're working to increase diversity in the industry.

Minnie: Over the previous 15 years we'd been facilitating the creative side and seen an incredible change in the make-up of onscreen talent. We wanted to address off screen, so two years ago we launched Dandi.org.uk.

Fraser: We're currently working with over 40 production companies and organisations to help them hire more inclusively. We're working with Amazon to find writers through WriterSlam, with HBO to deliver directors into high end drama, and the BBC to engage and support alumni from their various schemes, who in the past may have fallen through the net.

Minnie: We're a bridge between those unrepresented communities and the insular world of our industry. We speak in both languages and it enables us to offer a bespoke service to our industry that is in line with the time and budget constraints involved in making shows and at the same time delivers the right talent as well as providing support for that talent.

Your own show, Sorry, I Didn't Know is currently on ITV. Tell us more about the format. 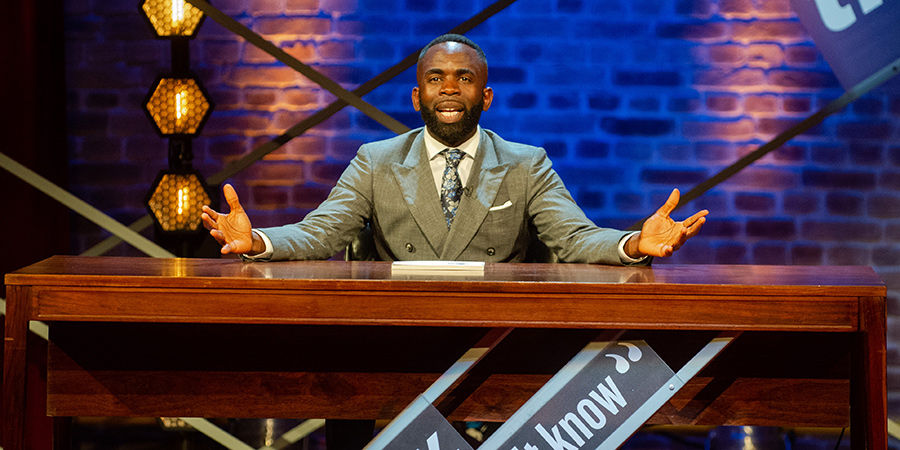 Fraser: SIDK is a classic comedy panel show just like any other and we made it that way intentionally. Riotous laughs, great guests and a little bit of 'take home' info.

Minnie: It just happens to be based on lesser known history.

Fraser: We're tired of being told what 'Black' content is or can be.

This series follows on from the 2016 pilot. Did you have to keep pitching it to ITV until they said yes, or did they actively make the approach to you?

Fraser: We'd been trying for 4 years with all of the broadcasters but were met with pretty much the same answer, that it's not for 'our audience.'

Minnie: Which is code for 'People don't watch Black shows.'

Fraser: Which is nonsense and something we've always challenged.

Minnie: It's like a bizarre inferred expectation of racism towards white people. It's just wrong. Think back to shows like Desmond's, The Fresh Prince, The Real McCoy - plenty of white people loved those shows.

Fraser: And thankfully, that expectation that white people won't watch Black shows is one that broadcasters are beginning to reject. The global reach of content has changed a lot of that. You want bigger audiences? Then serve more people!

Minnie: And fair play to ITV who have put their money where their mouth is in a way that many of the broadcasters have failed to do. ITV have given us the support that they'd give to any production company they're working with at this scale, and instead of setting up a fledgling production company like us to fail, they've given us the support to play on a level field and create a high level show.

Fraser: That support and understanding is what real change looks like and we're hoping other broadcasters follow suit.

It looks like you've risen well to the challenges of making a show adhering to the coronavirus safety measures. How much of a challenge was that? 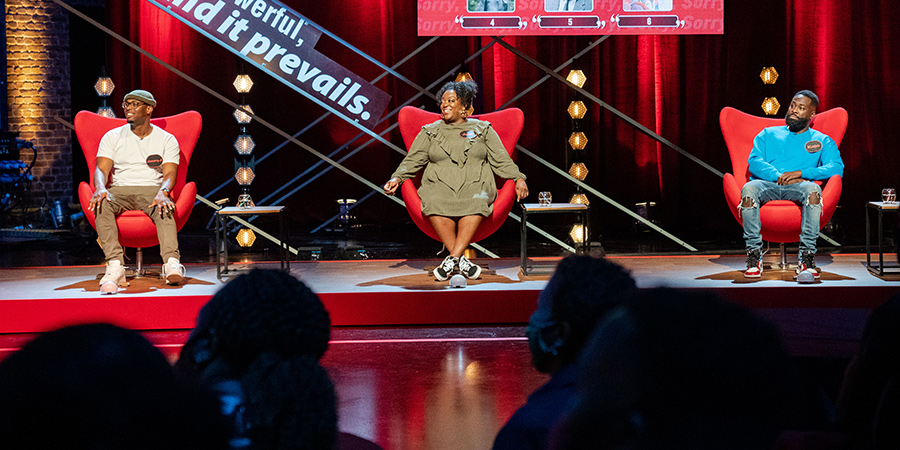 Minnie: For us it was vital that the filming was entirely safe for everybody involved, especially as with our inclusion not only being on-screen but throughout our crew and production team, we were mindful of that increased need to create as safe an environment as possible. We couldn't ignore the fact that people from Black and Asian backgrounds are at higher risk, so we had to be super careful due to our diverse cast and crew.

Fraser: We've seen a lot of shows over the past few months and they all look a bit 'Covidy'. Everybody far apart and echoes ringing through the sets. We wanted to address that directly so implemented cabaret style seating and took extra time with focusing on the aesthetic and set design.

Minnie: Covid definitely made the process longer as you have to be more measured and take more time moving things around or travelling through the building...

Fraser: And it's a bit rubbish everybody has to bring their own sandwiches...

Black History Month is just a month... but diversity needs to be a year-round thing?

Fraser: Absolutely! Black Lives aren't just for Christmas! I think we've seen that the issues that come to the fore during Black History Month indeed permeate the whole year, don't they? And this Black History month is like no other, isn't it? With the world the way it is and the context of the protests and us all shouting for just a bit more equality in the world, that's not going away.

Minnie: We're keen for this series to be on during the year instead of just one month as like Fraser says, Black people don't just exist for a month. The issues don't just evaporate come November the first. Our screens don't suddenly represent modern Britain properly when the clock strikes, and that's exactly why shows like this need to be on all year round.

For more information about TriForce Creative Network and Dandi visit thetcn.com and dandi.org.uk