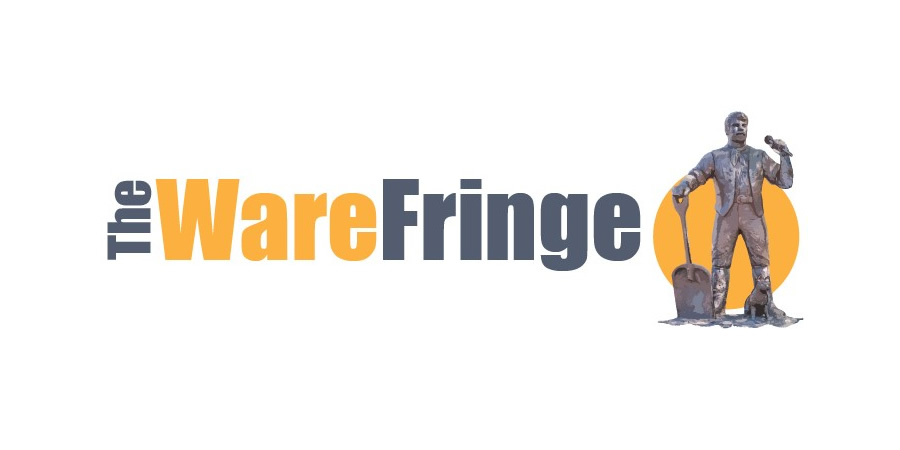 The Road to the WareFringe, Part 3

Si Hawkins has been taking us behind the scenes as he launches a little comedy festival (here are Part 1 and Part 2). The four-show all-dayer has now occurred, and here Si shares the lessons he took away from the day.

One thing you definitely should do when deciding to put on an all-day festival of Edinburgh Fringe previews is to check your dates thoroughly.

Now at The WareFringe we thought we'd done that, by not clashing with relatively-local-to-Ware festivals like Latitude, Standon Calling and the like. And we weren't going up against a big football event, like last year's World Cup which scuppered previews left, right and centre.

But what became apparent a few days before curtain-up is that we'd be going up against the Wimbledon men's singles final (which turned out to be the longest, ever), the British Grand Prix (which just seems interminably long), and - inexplicably - England reaching the Cricket World Cup final, and Sky letting Channel 4 show it live. Honestly, what? When does that ever happen? 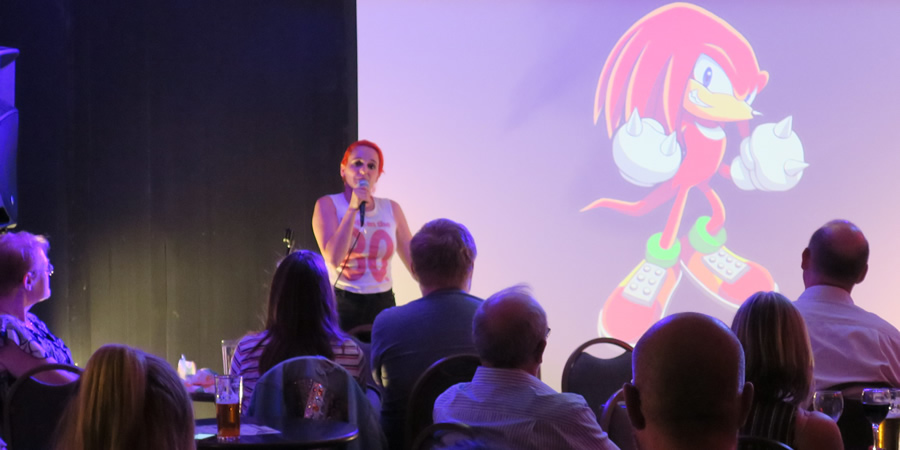 Anyway, thankfully it didn't hamper the festivities too much, apart from one moment during our third act, Sooz Kempner's typically entertaining show Mega Drive (which achieves the impressive feat of being thunderously likeable while also lobbing in lots of niche old video game references for nostalgic knob-twiddlers) - England dramatically win the cricket, a few texts ping in and a bunch of boisterous people barrel in from the pub, ignoring the 'no entry during shows' sign.

It suddenly looks like the mood will turn awkward, I head over gingerly to have a word - and they look slightly miffed, but drink up and head quietly off. I mean, they probably didn't leave a donation, but still... 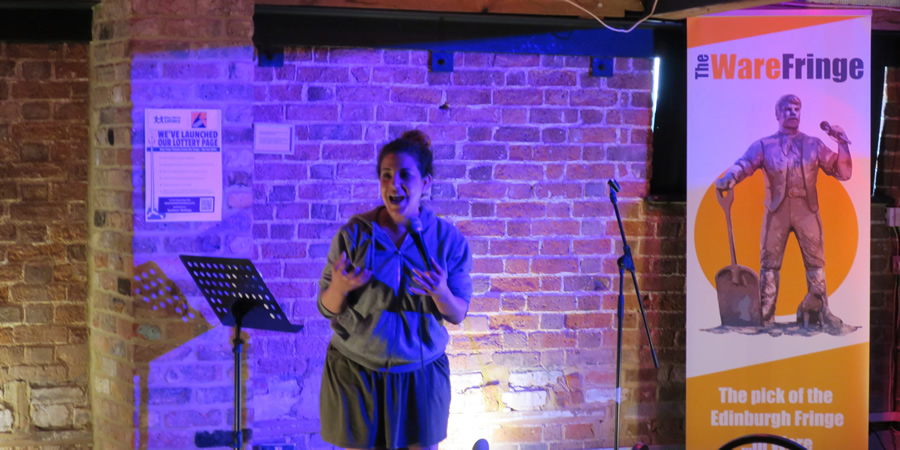 That free-entry-but-not-during-shows system worked pretty well otherwise, but a bunch of other important issues sprang at me before showtime: you need between-acts music, for example, and a device to play it on, and then there's the room layout. The all-dayer would be ticket-free, so we really had no idea how many would turn up - do you go for tables and chairs, or pack more in with rows of seats?

We went for the former, thankfully, as with thirty minutes to showtime it's a bit sparse. The sun's out, the sport's on, and as the promoter it's quite the whirlwind of emotions: a great wave of relief when the first act turns up in good time, then a gradual dread as you realise during the subsequent chit-chat that there's no great flood of punters arriving too. Now the whole event's success rests on this dribble of punters becoming at least a stream.

Such situations can restore your faith in humanity, though, because honestly, anyone who comes through that door between then and showtime - whoever they are - is your new favourite person. It could be Piers Morgan and you'd be pleased to... no? Ok then.

Thankfully there's a mini surge, but will it be enough to create an atmos? It will if you kick off with Maria Shehata, it turns out. Nearly-finished, her show Hero is a joyous look at love and life as an American-Egyptian in London, and Shehata is so effortlessly engaging generally that this audience would happily take a half-hour encore if she had enough new stuff to fill it. A good start. 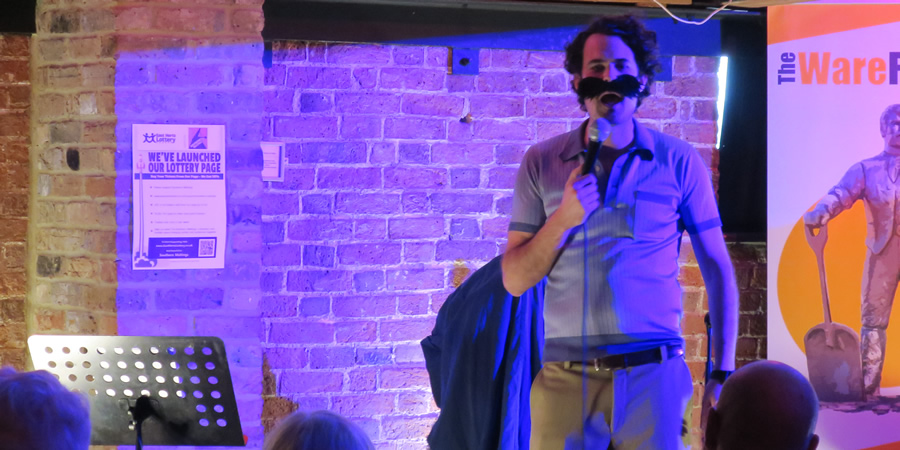 One important tip here: ask each performer for a tech list beforehand. Act two - the splendidly silly Paul F Taylor - had mentioned one impressive prop, but a more mundane requirement was wiring up his iPad. Urk - would that work? Thankfully Mark the Southern Maltings' tech expert located the right cable, as that device powers a memorable musical bit in Odd Paul, an idea-packed show that also packs a powerful emotional punch.

Not that you personally get to really enjoy any of this, what with all the running around, while during the gigs you're scanning the audience - are they enjoying it? - and masochistically fixating on the one bloke with the inexpressive face. And you're watching the door for the next act to arrive, which will be halfway through the current act's set, so try not to get yourself stuck on the wrong side of the room. 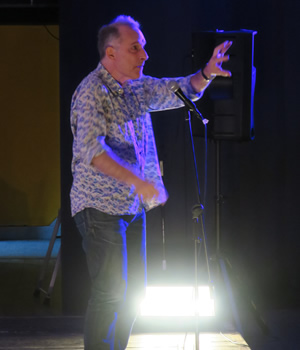 Other fiddly stuff: working out what the act with the projector will use for a screen - Sooz in this case decides to ditch our regular side-on stage altogether in order to use the venue's plush screen-and-projector combo on a different wall. We're switching stages between sets: it's like a proper bloody festival!

And - a useful tip this - make sure the final act can actually get in. It turns out that those mid-show interlopers who briefly hubbubed Sooz's set politely shut the outside door behind them, which means that yours truly gets a text shortly afterwards: yes, we've locked Nick Revell out of the building!

Thankfully Nick wasn't there long and is as nice as can be, although stick him in front of the Maltings' brick-backed regular stage and he's a man possessed. Revell's show - Eurasia's Most Eligible Psychopaths and Their Lovely Homes - is really quite remarkable: there are men of a certain age up the back howling more than they have since Portillo lost his seat in '97.

Actually the illustrious writer/performer admits that he left a bunch of the jokes out this evening, as he bangs the narrative into Fringe-friendly shape, but what a narrative. There are celebs and darts and weapons and a song contest and at least a couple of supernatural camels.

And then there are pints. Several pints. People came. Phew. 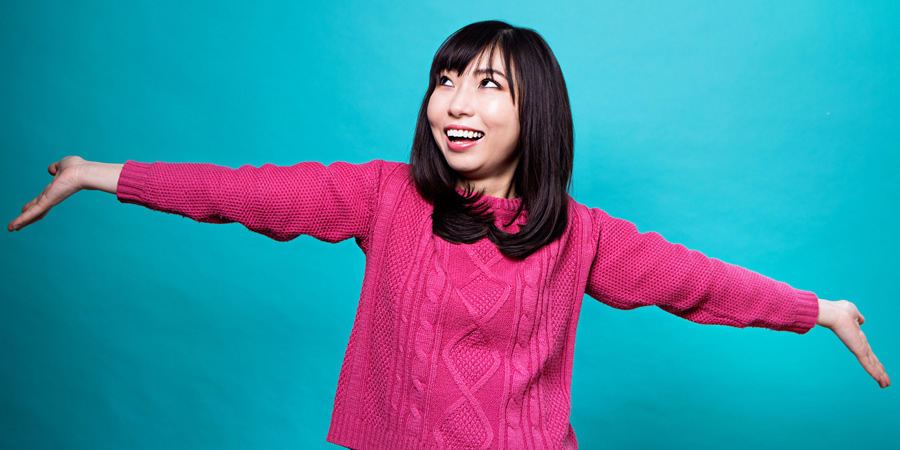 In retrospect, it was cool: the comics liked the venue, the audiences liked the comics, all good fun. So we're doing a second event, on the 24th, downstairs at the Saracen's Head (working title: WareFringe 2: Eclectic Boogaloo). It's a smaller room and dips into a different Fringe genre altogether, with the new spoken-word show from John Osborne (John Peel's Shed/After Hours). Then it's back to comedy with the debut hour from the brilliant Yuriko Kotani. We are quite excited.

Before that a local comic called CJ Hooper is doing a sort of WareFringe spin-off with a double-header of the two Edinburgh Fringe shows he's involved with - Hancock & Hooper's Excellent Adventure and Working Class Progress - at Ware cocktail bar The Mixer on July 19th. So the WareFringe already has its own fringe. Who would've thought it?