How to fund your comedy project with Kickstarter 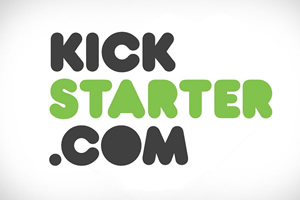 Scott Evans from Look Creative Studio explains how you can use the crowd funding website Kickstarter to get your comedy project off the ground.

Do you dream of creating your own comedy sketch show, an animation or perhaps even a documentary about your comedy? If so, then October 31st was possibly a very important day for you. Why? Well on this day the hugely popular and successful American crowd funding site Kickstarter opened to the UK.

Kickstarter is used by musicians, inventors, game producers and people in the entertainment industry who want to get their independent projects off of the ground. Many campaigns raise thousands of pounds but it appears that the sky is the limit as some campaigns have even broken the 10 million dollar mark, and now people in the UK can get in on the act.

Many people on this site's forums are aspiring writers and film makers who dream of entertaining millions of viewers with the comedy they have created, but getting your foot in the door is hard... and this is where Kickstarter could help you.

Some Americans have successfully acquired investors to make a pilot episode of a comedy show they wished to get commissioned. Many others ask for help in a smaller way.

Whatever you decide you would like to do, first of all you would need to go onto Kickstarter and set up a campaign asking for the finance that you require. To start with you need to explain what you would like to make and why it is you think your project is something other people should help you with. Imagine you are pitching a show to a producer, tell them why this would be the funniest show ever and why it is important that they help you on your journey in getting it made. 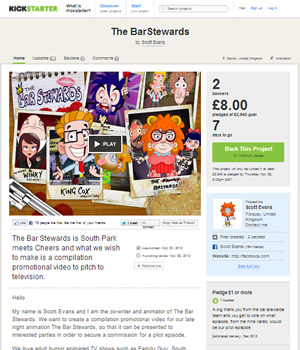 Next you need to explain what you need the money for. Camera hire? Actors? Lighting? Time off work to create it? Explain why you have asked for the amount that you have done.

However, it is not a case of setting up a campaign and then sitting back and watching the money come rolling in. First of all, why do people donate money to campaigns on Kickstarter? Rewards. Every campaign offers investors a selection of rewards for their pledges. For example, for £5 an investor might be rewarded with a personal thank you and be privy to updates on the development of the campaign - and the greater the investment, the bigger the reward expected. Someone putting up £20 might get a t-shirt, £50 may get them a signed poster or script copy and someone who donates £1,000 could be offered the chance to appear in the production, or be named as a producer on the project. There are no specific rules on the rewards that you offer, but make it worthwhile and special for people giving you money.

Is it like Dragons' Den where the investors get a percentage of what you are creating? No, fret not! You retain full ownership of your creation, with investors taking only the rewards you define.

So, you go on Kickstarter, you set up your campaign, you explain why your project is great, what the money will be used for and what rewards people can get - and then you can sit back and watch the money roll in? Not quite. Kickstarter (and other crowd funding sites) offer amazing opportunities but you've got to work for it. Your idea may be the best and your rewards could be fantastic but if no one sees your campaign then you've wasted your time.

The next key step is directing people to your campaign - and the right people, at that. Promote your project on social networks, amongst friends and any established supporters, YouTube; anywhere that you can. It might be hard work but your own reward could very well be worth all the time and effort that you put into it. 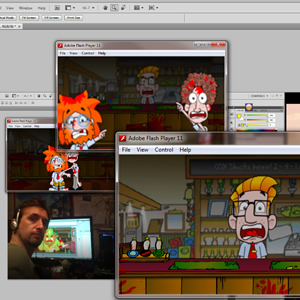 How do I know all of this? I myself was amongst the first wave of creatives from the UK hoping that Kickstarter would help fund my dreams. With a number of other designers, I have developed a cartoon comedy show that would be aimed at adults, such as Family Guy and American Dad!. Our show is called The Bar Stewards and would best be described as a cross between South Park and Cheers. TV is full of American cartoon shows at the moment and we believe we have a great idea for a British animated show. You can find out all about it and see lots of production images and video sample on our Kickstarter campaign page

We are hoping to raise funds so that we can create an animated promotional video showcasing exactly what our cartoon show is about, who the characters are and why is would be great to watch. We are not asking for the money to create an entire pilot episode but just enough so that we could create a video that we could present to production companies and other interested parties who may then decide to take on the project for an initial pilot.

This is the aspiration that we have, so what about you? Do you have a show that you would like to get commissioned? Maybe you want to create a video pitch that will make you stand out from everyone else submitting their scripts. Whatever it is that you want to do, people in the UK now have the chance to ask for help on Kickstarter. Good luck!