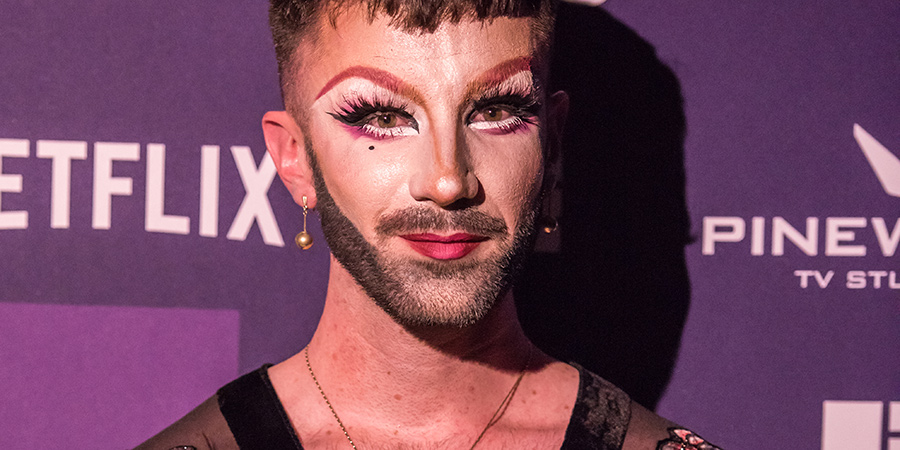 Callum Tilbury won the Edinburgh TV Festival's New Voice Awards last year. With the 2021 deadline approaching, we asked them to explain why it's worth entering a script into the competition.

Hi Callum. Tell us about you. You're also known as Lady Aria Grey?

Yes, Lady Aria Grey is my drag name. I'm a writer-slash-drag queen, and I moved to the UK three years ago from South Africa, where I grew up.

As a writer, I've written mostly for theatre. But thanks to the Edinburgh TV Festival New Voice Award I won in February, this year I've started dipping my toes into writing for TV, which is very exciting!

As for my drag, it's also kind of tied up in my writing. When I perform as Lady Aria, I'm usually doing something wordy that I've written. Things like stand-up comedy, or live readings of my own naughty short stories. I've also recently written a one-man (one-queen?) play, which will hopefully see a stage next year, Covid-allowing. 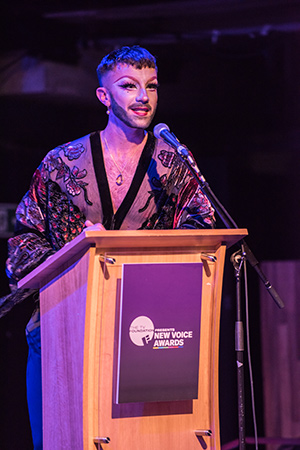 What's the drag scene like right now? Presumably lockdown has stopped you performing?

Yes, sadly gigs are thin on the ground right now, but usually the drag scene is incredible! In London it's so big and vibrant and varied that it's hard to describe succinctly. There's every kind of drag imaginable in this city, so we're really spoiled for choice here.

In South Africa, the drag scene is not quite as big, but it's growing very quickly and it's just as vibrant. There's also a great drag pageant circuit in South Africa, which I don't think enough people know about.

While I've really missed drag during lockdown, a few of the writing projects I'm working on are drag-related, so I still feel like I'm keeping Lady Grey's spirit alive. And it's actually been quite nice to have a break from cleaning my wigs all the time.

How did you get into writing? And comedy writing?

I think I always knew I wanted to be a writer - I started writing silly songs, poems, and sketches when I was small, which got longer and longer as I grew up. Then I went to drama school, and then did my Masters in Writing for Stage and Broadcast Media, so it's always been something I've been following.

And I've always leaned way more into comedy than drama. I watched a lot of Cartoon Network as a child, and I think that had a lot to do with it...

Discovering drag during my uni years was also a big turning point in my writing. I think for most of my undergrad studies I was struggling to reconcile my desire to be a "good actor" and a "good writer" with my obsession with dresses and cheesy movies and bad jokes and flouncing around being outrageously homosexual. Then a friend introduced me to Drag Race, and I was finally shown how "good" all of those things can be. Drag is magic! And it was only when I realised the value of camp, that I actually started to get anywhere with my writing.

You're working with Objective Fiction on a script currently called Vague!. Tell us what that's about...

Unfortunately I can't give too many details about it just yet, other than that it's very draggy...

Your script won at The New Voice Awards, run by the Edinburgh TV Festival. How did you come to be involved in that competition?

I was doing a stand-up comedy course at The Soho Theatre, and someone else on the course posted a link to the awards in our Whatsapp group. I had just finished the first draft of my Vague! script as part of my Masters, and so I submitted it... fully expecting it to be HARDCORE REJECTED (as it had been from MANY other competitions)... so of course I was very surprised and pleased with the result! 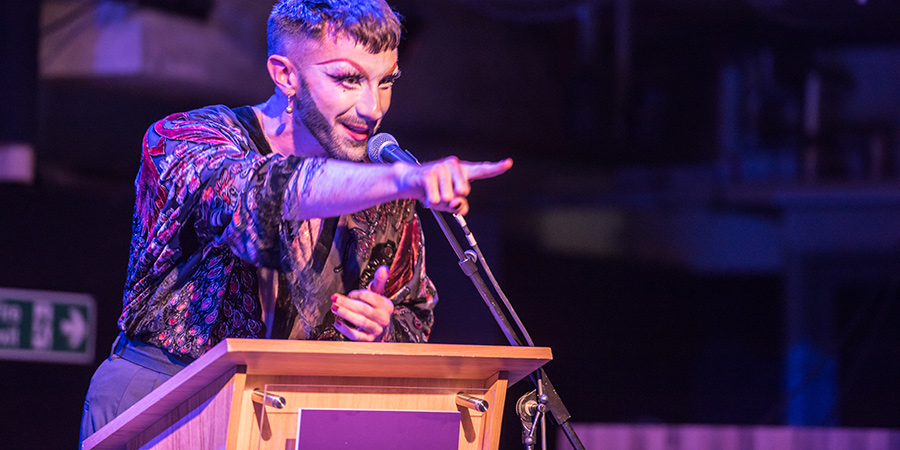 What have the benefits been in relation to being involved in the awards?

It's been huge. The main things were that my script got optioned by Objective, and I've been developing it over the last few months with the help of an AMAZING producer.

And, off the back of the award, I was also signed with an agent at United, which was wild! My agent has also helped me land one or two other jobs coming up, which I'm also not allowed to go into too much detail about yet (sorry!) but the main thing is, there are some things in the pipeline.

So yeah, overall, it's meant that my dream of being an actual real professional writer is looking like way more of a possibility than it did a few months ago. 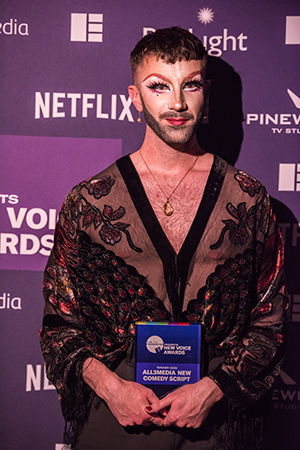 What's it like working with a production company on your script?

Overall it's been incredible. I think the main positives have been:

- Amazing feedback from comedy geniuses - they've pushed me to think far harder about every aspect of my script than I had before.

- Help with the overall structure of the script, and help with fleshing out each character and what exactly makes each one funny.

- I've picked up technical skills like how to do a proper beat sheet, and learned how to use Final Draft.

- Being able to say "I'm developing a script with Objective Fiction" is very very cool and has helped with getting several other applications taken seriously (!).

As for negatives, there really haven't been many. It can be tricky having several different people give feedback on your script. On the one hand, you feel like you have to listen to every piece of advice, and implement every note. But sometimes the notes clash, and then it's really difficult to know what to do. But even then - that's what producers help with, and the producers I've been working with really know what they're doing, so I feel really lucky. It's taken a while to hammer out all the kinks in the script... but I think I'm getting there.

Overall the process has been really great. I can feel how much my script has improved in the last few months, and that's a really effing great feeling.

Do you have any tips for other up-and-coming writers who are looking to develop a sitcom or comedy drama?

Haha, I am definitely in no position to be offering advice just yet, since I'm still in the very early stages of this whole process and I don't have a clue what I'm doing!

I think the only thing I could say is that you absolutely have to apply for as many things as you possibly can. You will get rejected a lot, but you will also get surprised by having random successes where you didn't expect them. But you really have to cast the net wide.

P.S. If you aren't signed up yet, Lane's List is an excellent resource for writing opportunities. It's mostly for theatre-related opps, but there are occasional TV things in there too. I think it's about £3 a month, but it's so worth it!

What are the next steps for you, in terms of Vague!?

Well, I think it's nearly ready to be sent out and pitched to broadcasters - I'm just waiting on my final round of notes, but it's almost there. And once it gets sent out... who knows!

I expect it'll be a bit like ice fishing. You throw some bait down an icy hole into the cold, unforgiving sea, unsure if there are even any fish alive beneath you, but praying something bites.

But I also HATE fishing, so don't take my word for it. Don't know why I used that metaphor.

For entry forms and further information on the New Voice Awards 2021 visit thetvfestival.com. The entry deadline for all categories is Monday 25th January 2021 (or Friday 18th December 2020 for Early Bird rates).