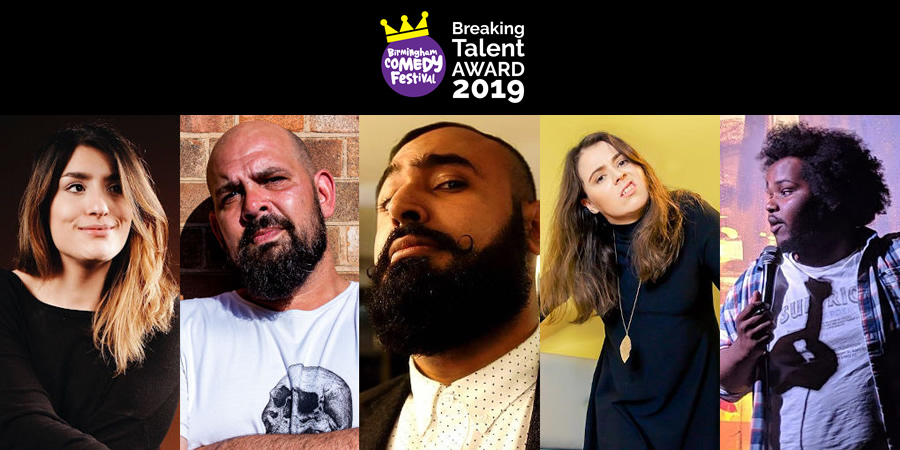 The coveted annual prize aims to recognise and support 'breaking talent' from the West Midlands region, offering the winner a much-valued career boost.

A collaboration between the long-running festival and The Glee Club, the award show officially kicks off the 10-day festival on Friday 4th October 2019, at The Glee.

Originally from the outskirts of Paris, Ceyla AB now calls Birmingham's Jewellery Quarter home. Performing since February 2017, she cites Dylan Moran, David Mitchell and Maria Bamford, as well as Les inconnus and Desproges, as comedy influences. Combining work in customer service with stand-up, she recently made it through to the Funny Women 2019 finals. Celya describes her humour as "warm, daft, strange ..."

Having made his stand-up debut at Stirling's Bar, in Birmingham's Jewellery Quarter, just 18 months ago, Erdington's Jay Droch has gone on to open for Guz Khan and perform at a BBC Asian Network Comedy Night. Working in logistics, he's also a member of improv' troupe Jumprov, and cites Robin Williams as his number one comedy idol.

From tentative steps back in 2015, Adam Elmi started focusing more heavily on stand-up during 2017, developing a "dark and self-depreciating" style. With three part-time jobs (including one as "a bouncer"), he lives in Edgbaston, Birmingham, and recently opened for Tom Stade on his UK tour.

Born in Coventry, and now living in Bedworth, Doug Carter made his debut at Birmingham's The Roadhouse in the spring of 2017, though it was it was nearly nine months later before he decided to continue pursuing stand-up. He works in the construction industry, and his comedy combines observational humour with real-life stories.

A TV researcher and member of BBC Northern Ireland's Comedy Writers Room, Mary Flanigan started doing stand-up in her native Belfast, and has continued since moving to Kings Heath, Birmingham, at the beginning of the year. Name-checking Tina Fey, Josie Long, Ross Noble and Maria Bamford as key inspirations, she says her approach to comedy is "constantly changing."

All five short-listed acts were selected by a panel of comedy professionals based on live performances over the last 12 months. The panel comprised of Adam Jaremko (The Glee Club's Booker), James Cook (comedian and comedy tutor), Maureen Younger (comedian and writer, MY Comedy) and Josh Pugh (comedian, Birmingham Comedy Festival Breaking Talent Award 2015).

A spokesperson for Birmingham Comedy Festival says: "Our annual award continues to go from strength to strength, with no shortage of potential nominees. But after some heated debate, we've eventually whittled down a long list to Celya, Adam, Jay, Doug and Mary.

"We wish them all the very best of luck at The Glee Club. It's a great way to start the festival, and is an exciting opportunity for audiences to see some of the best acts from the region before they break through."