The Big Comedy Conference 2020 will focus on writing for broadcast, intending to help sketch and sitcom writers of all levels of experience further their writing knowledge and career.

The 2020 conference follows on from our widely acclaimed 2013 and 2014 events, which featured the likes of Jo Brand, Al Murray, David Nobbs, Hamilton & Jenkin and Simon Nye, to name a few.

We'll reveal many more details about our plans for the conference and the line-up of guest speakers early in 2020, but you can book now at the following super early bird rates: 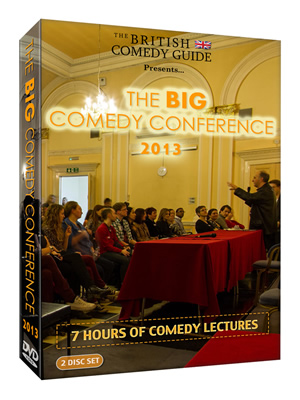 This must-own 2-disc DVD set packs in seven hours of lectures from some of the best names in the business, as seen at our hit 2013 Big Comedy Conference.

Alongside widely-praised keynote interviews with Al Murray and Jo Brand, you'll receive invaluable, inspiring information about writing for children; working for radio; the Holy Grail of sitcom; and panel shows. There's also a highly informative discussion about how to get an agent, one of the biggest questions faced by new comedy writers and performers.

The full contents is:

- How Do I Get A Producer / Agent? (with Caroline Norris, Bill Dare, Vivienne Clore)

The DVD costs £20 (including P&P). You can buy the DVD direct from BCG:

Or, alternatively, you can purchase via Amazon: