Jack Docherty and Gemma Whelan join us for part two of this Badults Special mini series, and it is a long rambly corker of an episode full of dodgy stories, dodgier accents and the dodgiest legal arguments you're ever likely to hear. Plus there's scurrilous gossip about REDACTED and REDACTED which almost derailed the podcast completely.

Thanks to Gary Ogden for the brilliant artwork - go and check out his other stuff here. gogdenart.tumblr.com

Hopefully we'll be back with more episodes later in the year - do keep your eyes peeled and come and sees the show live if you can. Also, please do evangelically spread the good news of #flatslam with all your friends and acquaintances.

And don't forget to tune in to Badults on Mondays at 10pm on BBC3! 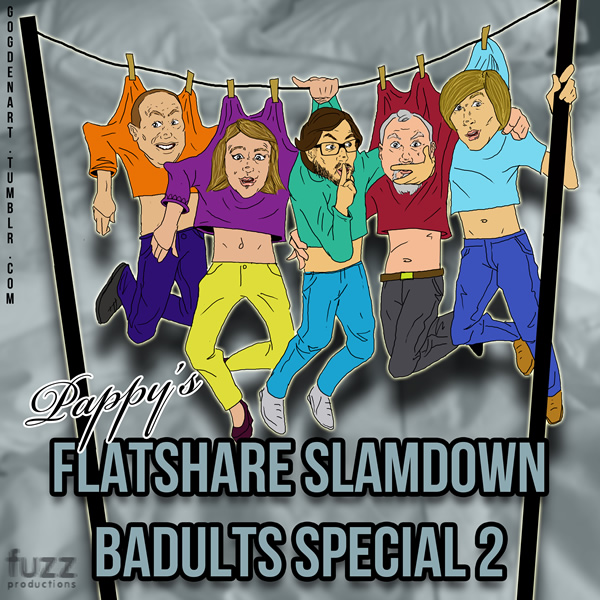 Hark the Herald Angels Sing! Pappy's Flatshare Slamdown is returning for a fifth series in January 2015! Matthew, Ben and Tom will be getting into more ridiculous arguments over a...

Adam Buxton and Ivo Graham are the guests in a very fun episode which contains perhaps the best pun ever. Also... Hesitation, Hair, Hula Hoops, Hagrid and Haystacks! The...

Helen Zaltzman and Holly Burn join Pappy's at Green Man festival for a fun episode recorded in a massive comedy tent at 1am on a Sunday morning! Featuring... the letter...

Romesh Ranganathan and Rob Beckett join Pappy's in the last episode of this short but hopefully perfectly formed series. Featuring... grumpiness, cheeriness, two Billies and windmilling. The brilliant but...