Richard has come over all peculiar (did somebody say come over?). Maybe Cocky Carrot has been right all along. When he pulls himself together we get to see Peter Dibdin as we've only seen him once before (and that was a long time ago) and Ally tries to work who backed the Oxford jab. There's a new judicial system proposed by Richard and someone has become a grandad. And there's some medical advice backed by a doctor about the danger of keeping farts in. This show literally has everything. It will have you in bits. If you've desiccated in a box. Plus an absolutely legendary guest star. Thanks again to sculptor Richard Ison for his incredibly puppet making skills. 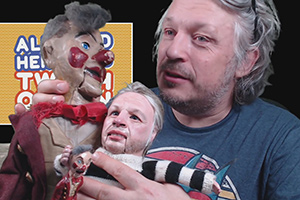 Ian Twitch's 30 episode commission is up, so Rich is fighting for his life here. Will he be back for Series 2? And when? He manages to cram in pretty...