Vikki Stone has followed an unusual career path to date. Following her training as a singer at the Royal Academy of Music in London, she went on to develop her career as a stand-up comedian, singer, actor and composer. Well-known as a comedy musician she has now branched out even further, having penned a Concerto for Comedian and Orchestra.

Originally workshopped at Wells Cathedral School (she is a former pupil), she has now performed the 50-minute work at the Latitude and Glastonbury Festivals, and most recently at the 2017 Edinburgh Fringe (where she was accompanied by the Chamber Orchestra of the National Youth Orchestra of Scotland Camerata under the baton of Ben Glassberg).

As the title suggests, the Concerto is a vehicle for Stone's own comedic talents but it has been written in such a way that it can be performed by other comedians, with the script able to be adapted as necessary. It's in four movements, with a narrative, and it also introduces the audience to the orchestra and issues of concert etiquette! Highlights include 'The Arrival of the Dishwasher', and there's even a 'March of the Latecomers'...

The Concerto for Comedian and Orchestra is available in versions for large and small orchestra. 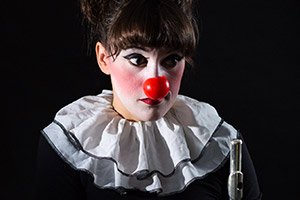 Vikki Stone's groundbreaking work Concerto for Comedian and Orchestra has been published for performance by orchestras around the world.