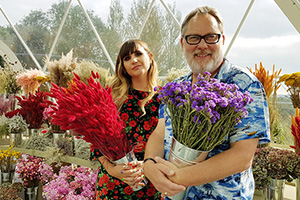 Jim Moir, aka Vic Reeves, and Jools Holland are making a podcast together.

The first posters have emerged for The Glove, the film written by and starring Vic Reeves and Bob Mortimer.

The comedian and artist - real name Jim Moir - and the model on their green-room romance.

"It's wrong, but I did like rubbing my legs at the ladies".

One and done: Vic and Bob's Lucky Sexy Winners

Being a huge fan of Vic Reeves and Bob Mortimer meant that before watching this 2012 pilot from the duo I presumed by the end of it I'd be shaking my fist at the injustice of it not being given a full series, and indeed that was the case. It's not as if Vic and Bob are exactly newcomers to tv either, presumably Channel 4 knew exactly what they'd be getting from the deranged duo and so it feels odd that it wasn't picked up.