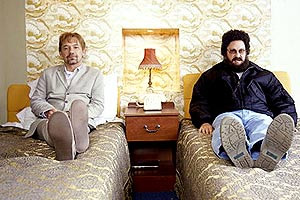 We take a look back at Catterick, the surreal 2004 BBC Three comedy from Vic Reeves and Bob Mortimer.

Vic and Bob have had many a success over the years, from Big Night Out to The Smell Of and Bang Bang It's Reeves And Mortimer, and of course Shooting Stars was huge for them, lasting for many years. But the one time the public haven't loved a series was when they created their best work, the sitcom Catterick, which told a six part story about a man searching for his lost son. All of the episodes are equally strong so choosing the best for this feature was quite difficult, so I went for the first as it serves as a superb introduction to the madness that would ensue.

Still Open All Hours to return

Contrary to tabloid reports, Still Open All Hours has not been cancelled by the BBC and is due to return to screens.

Auf Wiedersehen, Pet fans - and even its star Tim Healy - have blasted broadcasters for butchering the 1980s comedy-drama. Healey, who played Dennis in the hit ITV series, criticised the way the show had been edited before being repeated on the Yesterday channel.

Still Open All Hours will return to BBC One for a fifth series later in 2018. The recommission means that the sequel has now accumulated more episodes, and more series, than the original hit show.

In praise of Benidorm, the UK's most under-rated sitcom

It's a funny old game, comedy. Steve Pemberton's critical accolades for The League of Gentleman, and BBC2's late night cult hit, Inside No 9, are legion. But you'll be hard pressed to read glowing reviews of his eight years starring in the ITV comedy Benidorm. In fact you'll be hard pressed to read anything glowing from sniffy critics about the hit sitcom, despite its millions of viewers, longevity and viewer-voted National Television Awards. In fact, one critic went so far as to describe the viewing public a "disgrace" for voting for it.

ITV to celebrate 10 series of Benidorm

ITV is to broadcast Benidorm: 10 Years On Holiday, a documentary celebrating its sitcom being on air for ten years. It has also released more details about Series 10.

How Andy Capp was inspired by the creator's father

The popular strip's 60th ­anniversary will be marked with a new exhibition of the character who became Willi Wakker in Germany, Andre Chapeau in France and Andy Cappello in Italy.

When a series keeps coming back year after year, it must be doing something right. Benidorm (ITV) has booked in for a ninth series of cheerful antics on the Costa del Crud. The principal ingredients are sun, sea and a seemingly limitless supply of lame gags about bodily functions.